Looting Matters would like to thank all its readers for their support and encouragement over the last year. 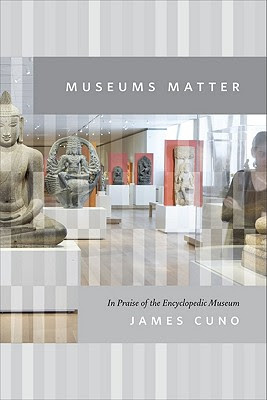 My copy of James Cuno's Museums Matter: In Praise of the Encyclopedic Museum (University of Chicago Press, 2011) has arrived. There are four main chapters covering the Enlightenment, Discursive, Cosmopolitan and Imperial Museums.

A browse suggests that Cuno has chosen to sidestep one of the most pressing issues for so-called encyclopedic museums in North America, Europe and Japan: the acquisition of newly surfaced antiquities. The "Medici Conspiracy" has brought about the return of some 130 antiquities to Italy from North American collections. How have these high profile encylopedic museums damaged the reputation of museums in general?

I look forward to reading Museums Matter and to reflect on this telling title.

TheWelsh Government has published details about its handling of the Portable Antiquities Scheme in Wales. The information, released under Freedom of Information, shows that the National Museum of Wales alerted CyMAL on 26 November 2010 ("increasingly concerned"; "The issue ... giving us the greatest concern ... is the Portable Antiquities Scheme"). The letter highlighted the need for Wales to meet the funding gap of £64K. (It is worth comparing these figures to the ones that appeared in the PAS press release in November 2010.)

The second memorandum (from CyMAL dates from 28 October 2011. This seems to suggest that little formal planning was undertaken during the intervening 11 months. (This overlooks the discussions that were taking place in public fora as well as in academic publications.) Interestingly the memorandum required a decision by 1 November 2011. In other words the memorandum was sent on a Friday and a decision was required by the following Tuesday. The prompt seems to have come from "metal detecting clubs in Wales". The memorandum presents a chronology of the funding proposals. The stepped decrease in funding from England is presented. The arrangements for an announcement are discussed ("Rather than a press release ...") as well as a note on the "publicity" by "metal detectorists and historians".

The last year has been a major time of change with a move from Swansea University to University Campus Suffolk. Highlights have included the news that I will be a recipient of the Archaeological Institute of America's Outstanding Public Service Award for 2012.

In January I tried to anticipate some of the stories that were likely to develop. Here are some of the developments.

A significant number of objects on sale in New York and identified from three separate photographic archives were highlighted in the Italian press. This put the ethical code of the IADAA under question. (The same gallery offered further material later in the year.) Other material appeared on the London market in April and in October, as well as on the New York market (and see here). Another item appear for sale in Germany. The MOU with Italy was extended. The "Aphrodite" returned from the J. Paul Getty Museum to Aidone on Sicily. The Minneapolis Institute of Art has finally agreed to return an Athenian krater to Italy. This was joined by two Roman statues from a North American healthcare company. South Italian pottery has been acquired for the Mougins Museum of Classical Art. An Athenian pot in the Museum of Cycladic Art in Athens has been linked to one of the seized photographic archives.

In Egypt the year started with news about the looting of museums and archaeological stores as part of the uprisings linked to the so-called "Arab Spring". The case of the Saint Louis Art Museum's mummy mask has continued to rumble on without resolution. Antiquities offered on the London market were returned to Egypt. These included items from the mortuary temple of Amenhotep III. A major ring has been broken in North America: material from a private collection was loaned to major museums.

The long-running dispute over the upper part of the "Weary Herakles" (formerly owned by Shelby White and Leon Levy) was resolved when the sculpture was returned to Turkey to be reunited with its (excavated) lower half. The Menil Foundation was to return frescoes to Cyprus. The J. Paul Getty Museum returned further material to Greece.

Items were looted during the political upheavals in Libya. A Roman portrait head from Sabratha was sold on the London market.

2011 has been a year of major changes, so this year I would like to send readers of Looting Matters Christmas Greetings from Suffolk in eastern England.

The Humana Fortuna and its New York Source

The news that Humana will be returning two Roman statues to Italy have started to raise other questions. Humana's twitter feed suggests that there is no information on the New York gallery "at the present time". What does this mean? Does the company have no record of where it purchased the sculptures? Or is the New York gallery still active and would not appreciate unwelcome and adverse publicity?

Perhaps there will be a disclosure in the near future to demonstrate the "good faith" of the return.

The Italian Ministry of Culture has announced today that the North American healthcare company, Humana, based in Louisville, Kentucky, will be returning two Roman marble statues to Italy (press release, in Italian; "US company sends Italian statues home", AP December 14, 2011).

It appears that Humana had acquired the two statues "in buona fede" from an unspecified New York gallery back in 1984. The company then contacted the Italian authorities when it was informed that the statues had been removed from Italy illegally (“illecitamente sottratti”). The Italian Minister of Culture praised Humana for taking the initiative to co-operate with the Italian authorities.

This appears to be in marked contrast to the behaviour of a New York gallery and a New York auction-house when objects that they were due to sell were identified from seized photographic archives.

It will be interesting to learn which New York gallery supplied Fortuna and the other Roman statue to Humana. And how were the statues identified? Which photographic archive was used? Who supplied the New York gallery?

The US Department of Homeland Security has issued details of the types of archaeological material that are covered by the import restrictions. There is a position statement about the US Government:


The United States shares in the international concern for the need to protect endangered cultural property. The appearance in the United States of stolen or illegally exported artifacts from other countries where there has been pillage has, on occasion, strained our foreign and cultural relations. This situation, combined with the concerns of museum, archaeological, and scholarly communities, was recognized by the President and Congress. It became apparent that it was in the national interest for the United States to join with other countries to control illegal trafficking of such articles in international commerce.

The list of archaeological material includes Cycladic figurines as well as ancient coins.

It appears that Essex Police are now investigating the gold sovereigns discovered during a rally at Twinstead near Sudbury in Essex ("Halstead: Appeal for missing coins worth £70k", Halstead Gazette December 1, 2011). It appears that approximately 200 gold coins, with an estimated value of £70,000, have gone undeclared.

PC Andy Long, who acts as a heritage crime officer with Essex Police, made the situation quite clear:


All the coins found on the site are protected by the Treasure Act. They are treasure trove and have to be declared to the county coroner. We would urge anyone who has taken any of the coins or knows of their whereabouts to contact me immediately."

PC Long can be contacted via here.

Source: Manhattan DA. It seems that another piece displayed in the exhibition, Glories of the Past , was seized from a NYC private collectio...