The Getty kouros: a modern creation? 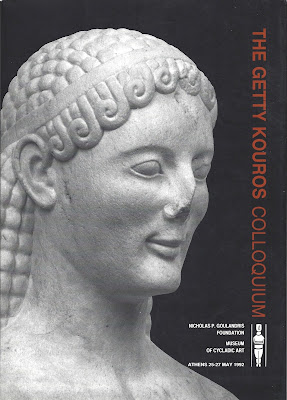 The refurbished galleries of the J. Paul Getty Museum no longer include the Getty kouros, a sculpture purchased in 1985 (Christopher Knight, "Something's missing from the newly reinstalled antiquities collection at the Getty Villa", LA Times April 19, 2018). Knight explains:


Unexpectedly, the Getty kouros, a controversial sculpture even before the museum acquired it more than 30 years ago, has been removed from public view. The work is now in museum storage.

For decades, the life-size carving of a standing nude youth carried one of the most distinctive labels of any work of art in an American museum: “Greece (?) about 530 B.C. or modern forgery.” The label encapsulated puzzling issues about the work, whose questionable status as dating from the archaic dawn of Western civilization had been the focus of scholarly and scientific research, debate and international symposiums for years.

It is ten years since I provided an overview of the kouros here on LM. And over 20 years since Christopher Chippindale wrote a key review of the sculpture for the American Journal of Archaeology [JSTOR]. Perhaps the key lesson from this acquisition is that the lack of a rigorous due diligence policy by the Getty allowed this sculpture to enter or hover around the corpus of archaic sculpture.


According to the museum’s director, Timothy Potts, the kouros has not been downgraded to the status of a forgery or definitively determined to be a fake. The distinctive labeling, also appended to the sculpture on the museum’s collection website, still stands.

Potts said only that the consensus of art historical study, once divided, now leans against its authenticity.

Potts has had direct experience of dealing with possible modern sculptures that have entered museum collections. It would be interesting for him to explain how he apparently came to acquire a "Sumerian" statue for the Kimbell Art Museum for a reported $2.7 million. (For details see my comments here.)

The key threats to heritage in England and Wales are perceived as:


Some of these issues (e.g. lead theft from churches, so-called nighthawking, metal-detecting and the code of practice, off-road driving, and the illicit trade in cultural objects) have been covered by LM (and its sister blog, Heritage Futures) over a long period of time.


Christie's (New York, 18 April 2018, lot 26) has withdrawn a Pontic amphora, attributed to the Paris painter, after the pot was identified from the Becchina archive by Dr Christos Tsirogiannis.

Christie's state that the history of the piece is as follows:

If the amphora was purchased from the Freiburg gallery in 1993, and that the piece was still with Becchina in late June of the same year, was Puhze buying directly from Becchina? What other Puhze material came from this same source?

Who restored the amphora? When did this happen?

An Attic black-figured amphora that had passed through Puhze (after surfacing through Sotheby's) was returned to Italy.