One of the conservators at the British Museum speaks about why it is important to treat coin hoards as part of an archaeological context.

Context Matters: Collating the Past 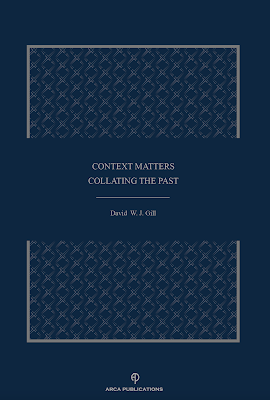 Context Matters is based on the twenty essays contributed to the Journal of Art Crime over its first ten years. They are supplemented by articles and review articles that were published alongside them. The chapters were written as museums in Europe and North America were facing a series of claims on recently acquired objects in their collections in the light of the photographic dossiers that had been seized from dealers in Switzerland and Greece. They engage with some of the recent debates over cultural property that include the Ka Ka Nefer mummy mask currently in the St Louis Art Museum, and the Leutwitz Apollo acquired by the Cleveland Museum of Art. Two of the essays reflect on the recent and controversial metal-detecting finds in England, the so-called Crosby Garrett helmet and the Lenborough Hoard. The volume contributes to the wider discussion about the appropriate due diligence process that should be conducted prior to the acquisition of archaeological material.

Peter Sharrer and the Getty

It would be interesting to know the source of the Greek Neolithic figures (eleven in number) and vase fragments that the Getty acquired in 1995. They appear in the published list as "donated jointly by Barbara and Lawrence Fleischman and Herbert L. Lucas". But the Getty's online catalogue tells that they were sold by Peter Sharrer Ancient Art of New York.

Why the differing accounts? Are the listed donors just the people who paid the bills?

Lucas, incidentally, donated fragments for the krater attributed to the Berlin painter that the Getty returned to Italy.

Sharrer also sold a proto-Corinthian recumbent ram and a Corinthian lion rattle to the Getty in 1986, and a Minoan jar in 1990. Sharrer is also known to have purchased from Robin Symes, e.g. the portrait head of Faustina the Younger.