Silence from the Met over those fragments

In January LM was able to note that 40 pot fragments from the Dietrich von Bothmer collection had been returned to Italy by New York's Metropolitan Museum of Art.

I have emailed the press office at the Met but was told that they do not answer enquiries from non-journalists. (In fact I know that a journalist has asked parallel questions and has not received the courtesy of a response.) So I emailed Tom Campbell, the director of the Met, but so far there has been silence.

Will the Met be publishing a list of the pieces handed over to the Italians? Will the Met include the full collecting histories? How did von Bothmer acquire the fragments? What is the basis for the return? Do any of the fragments fit pots already returned to Italy?

"A gaping hole in the legal protection for finds"

Britain's ITV is making a programme, "Britain's Secret Treasures", about the way that the archaeological heritage of England and Wales is being eroded by the unchecked use of the metal-detectors. Or to put it another way, the programme will discuss objects recorded in the Portable Antiquities Scheme (PAS) database.

The programme will be fronted by journalist Michael Buerk, the incisive host of BBC radio's "Moral Maze", and Bettany Hughes.

I wonder if the programme researchers will read the Forum Piece about PAS published in Papers of the Institute of Archaeology (just round the corner from the British Museum). In case anybody has not read part of my conclusion:


The Portable Antiquities Scheme has attempted to bridge the gap between the archaeological community and those involved with metal-detecting. In one sense there has been a huge success in encouraging the reporting of finds and interesting people in their local history. ‘Outreach’ events have involved metal-detecting clubs as well as local archaeological societies ... Finds Liaison Officers (FLOs) from PAS have made great efforts to follow up reports of finds. However, there is also concern that there are some detectorists whose main aim is to make money from this activity. Whole sites are being robbed out and valuable information has been lost. Is a ‘softly, softly’ approach failing to protect many archaeological sites in England and Wales from deliberate destruction? Do more sophisticated metal-detectors locate finds at greater depths? Would responsible detectorists object to a tightening of the Treasure Act?

At least the Guardian commentator has realised that not all is straightforward:


Many of the most historically exciting or precious objects have been acquired by museums, but the programmes will also consider the one that got away, the Crosby Garrett ceremonial parade helmet, which exposed a gaping hole in the legal protection for finds. Although one of the most beautiful Roman objects ever found, and exceptionally rare across the entire Roman empire, it was not legally treasure because it was made of gilded copper alloy, and the finder exercised his right to send it directly to a Christie's auction. It was estimated at £300,000 but sold for £2m, with the anonymous private buyer massively outbidding Tullie House museum in Carlisle.

The Crosby Garrett helmet is discussed in the PIA forum piece.

Perhaps Buerk will apply his considerable talent when he is given the opportunity to interview key personalities in the debate. And perhaps senior members of PAS will be asked to describe where they can see any "gaping holes" in the present legal protection for archaeological finds.

It appears that Turkey has placed a claim on a Roman sarcophagus discovered in the Geneva Freeport (Agathe Duparc, "Un sarcophage romain saisi aux Ports francs de Genève", March 26, 2012). There is a suggestion that the sarcophagus could have been found in a cemetery in the Roman city of Perge in southern Turkey.

Phoenix Ancient Art has issued a statement through its lawyer:

It should be noted that the sarcophagus was found at the premises of Innana Art Services.

Will the full collecting history of the sarcophagus be released in the interest of transparency?

In June 2010 it was reported that the Indiana University Art Museum (IUAM) contained material that had been derived from Edoardo Almagià. Earlier this month Chasing Aphrodite published images of the two pieces reported to be derived from this source. Both pieces, a South Italian black-glossed stemless cup and an Apulian trozella, were acquired in 1986 (inv. UI 86-48-1, -2).

IUAM has a stated mission:


The IU Art Museum’s mission is to preserve, exhibit, collect, research, publish, and interpret original works of art to advance the academic goals of Indiana University and to enrich the cultural lives and spiritual well-being of society.

Such a statement would suggest that there would be a desire to publish the full collecting histories of both the pieces. Retention of such information would presumably go against the academic goals of Indiana University (and indeed any university museum).

The IUAM's director is a member of the Association of Art Museum Directors (AAMD). The AAMD guidelines on antiquities do not allow a passive response when the museum's attention is drawn to concerns. The AAMD would expect the museum to contact the Italian authorities to resolve the issue.

Has IUAM contacted the Italian authorities? Will IUAM publish the full collecting histories?

I note that 1986 was the year that the J. Paul Getty Museum acquired an Attic cup from Almagià.

It appears that the coin-dealer who was apprehended in New York earlier this year at the International Numismatic Convention has been bailed again for the hearing to be heard in July. The dealer is the owner of an IAPN member organisation.

The coins linked to the case appear to be associated with Italy. It is therefore not without significance that the name of the dealer, Arnold-Peter Weiss (described as a "coin-dealer"), appears on the list of those who gave evidence for the consideration of the MOU with Italy back in 1999 (and published in 2000). The co-owner of Weiss' numismatic company also features in the list, along with the name of the present paid lobbyist for the IAPN.

Norbert Schimmel as the model collector

News that Turkey has requested the return of part of the Norbert Schimmel collection is likely to have repercussions. I note Shelby White's comment: "Norbert Schimmel set a high standard for us as beginning collectors, not only for the quality of his collection but for his belief that it was to be shared with others" (Shelby White, "Building American museums: the role of the private collector." In Who owns the past? Cultural policy, cultural property, and the law, edited by K. Fitz Gibbon: 165-77. New Brunswick: Rutgers University Press / American Council for Cultural Policy, 2005: p. 171).

It looks as if there are precedents for the return of material from the Norbert Schimmel collection.

Turkey and the Met

A report by Benjamin Sutton ("More Antiquities Woes for U.S. Museums Loom, As Turkey Demands 18 Artifacts From the Metropolitan Museum", Artinfo March 20, 2012) discusses the post on Chasing Aphrodite that suggests that the Turkish Government is requesting objects from the Norbert Schimmel Collection. It appears that the claim is covered by Turkish legislation and precedes the 1970 UNESCO Convention.

It will be interesting to see if Turkey pursues the series of bronzes that were removed from the Sebasteion at Bubon. One of the statues now resides in a private collection in New York.

Christina Luke and Jane Evans have published an overview of the CPAC public hearing back in January. The inclusion of coins features prominently. Opposition was noted as follows:


Three people attended the session opposed the renewal of the MOU with Cyprus due to the inclusion of coins on the list of objects with import restrictions. Their arguments were threefold: that the agreement abrogated their constitutional right to happiness (through collecting); that coins were meant to circulate widely in the ancient world, and so should continue to circulate today; and that the restriction of coins and the documentation required for legally imported coins would have deleterious effects upon small business. These views were met with penetrating questions by committee members.

At the end of the report was a list of those who provided oral comment. This suggests that one of the three who opposed the renewal of the MOU was a paid lobbyist acting for two numismatic trade organisations.

Do museums respond to photographic evidence?

Will the publication of parts of the photographic dossiers seized in Switzerland and Greece change the attitudes of museums? The answer is probably not, at least in Europe.

The Ny Carlsberg Glyptotek in Copenhagen has refused to hand over material requested by the Italian authorities. The Museum of Cycladic Art in Athens holds an Athenian pot recognised from the Medici dossier. The National Archaeological Museum in Madrid has yet to resolve its disagreement with Italy. And there are museums in the UK where material has been linked.

Looking further afield there is the unresolved situation with the Miho Museum in Japan.

And museums form only one element. Identification of stock with dealers and in auctions has made little difference to some.

It seems to me that the major issue is compliance with international agreements. And there seems to be little willingness to demonstrate co-operation in some quarters.

It appears that one of the two statues returned to Italy by healthcare company Humana was purchased from a New York gallery in 1984. The identity of the company has now been confirmed by a source in Rome.

Although the gallery was reformed during the 1980s, subsequent to the sale to Humana, it remains in the same family.

The same New York gallery has been linked to material that has been returned to Italy.

Interestingly the gallery has been linked to the investigations into the Becchina dossier. While I was in New York earlier this year I viewed material from the same gallery (now in a public space) that also features in the Becchina receipts (and images).


What does this say about the ethics of the North American trade in recently surfaced antiquities? Will the Becchina investigation be even more damaging to the reputation of North American museums and dealers than the Medici Conspiracy?

Suffolk Matters and the BBC 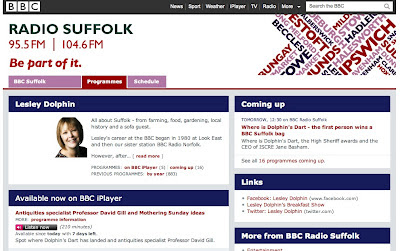 I was a sofa guest on Lesley Dolphin's BBC Radio Suffolk show this afternoon. We were chatting about my move to Suffolk but also touched on why the Icklingham Bronzes should be on display in the Ipswich Museum and not tucked away in a New York private collection.

The programme is available on the BBC iPlayer (at 2:30).

Chasing Aphrodite has discussed further objects links to Edoardo Almagià. This includes material in San Antonio and Indiana. There is also a discussion of material in Boston that I have discussed elsewhere.

There is also a note on the continued "stonewalling" by Princeton.

The exhibition "Byzantium and Islam: Age of Transition" opens at New York's Metropolitan Museum of Art later this month. More details can be found here, including a list of lenders.

An exhibition with a focus on Byzantium / Constantinople would expect to include material from the world-class collections in Turkey. But the press release has no mention of objects on loan from Turkey.

It now appears that Turkey has refused to make any loans ("Turkey Bans Artifact Loans to NY Metropolitan Museum", International Business Times News March 5, 2012). Ertugrul Günay, the Turkish Culture and Tourism Minister, has made a claim on antiquities in the Met's collection: "You have artifacts that were stolen from Turkey. We'll cooperate once you've returned them to us."

The items presumably include Byzantine silver.

It has been reported (by ARCA ) that a portrait of the emperor Septimius Severus that had been stolen from the Antiquarium of Santa Maria ...