A Paestan krater in New York and curatorial responsibilities

The Paestan krater in New York appears to feature in five Polaroid images from the Medici Dossier (and deposits are clearly visible). Dietrich von Bothmer reported that the krater noted the purchase of the krater from a New York auction (in 1989). He took the inscription to be 'Hybron'. The krater was acquired through the "Classical Purchase Fund".

Yet the most recent catalogue suggests that the krater was acquired from "The Bothmer Purchase Fund". The inscription is read (incorrectly) as 'Hybris' (as Tsirogiannis has observed).

This new evidence about the collecting history ("provenance") of the krater needs to be investigated.

I am sure that I do not need to remind the Director of the MMA about the AAMD Guidelines:


If a member museum, as a result of its continuing research, gains information that establishes another party’s right to ownership of a Work, the museum should bring this information to the attention of the party, and if the case warrants, initiate the return of the Work to that party, as has been done in the past. In the event that a third party brings to the attention of a member museum information supporting the party’s claim to a Work, the museum should respond promptly and responsibly and take whatever steps are necessary to address this claim, including, if warranted, returning the Work, as has been done in the past.

A third party, Dr Christos Tsirogannis, has brought "information" to the notice of the MMA supporting "another party's right to ownership of a Work". The MMA now needs to "respond promptly and responsibly" by contacting the Italian authorities. (A Paestan krater is likely to have been found in one of the cemeteries around Paestum.) Will this krater be returned?

I am grateful to Dr Christos Tsirogiannis for his assistance with this post.

The link between material derived from Giacomo Medici and Sotheby's in London is well documented through Peter Watson's Sotheby's: Inside Story. But what was happening at Sotheby's in New York?


Who consigned these pieces to Sotheby's? Did the same person or persons consign other material?

A Paestan krater and the Medici Dossier

Dr Christos Tsirogiannis has published an essay (Journal of Art Crime, 2014) on the Paestan bell-krater attributed to Python presently in New York's Metropolitan Museum of Art (inv. 1989.11.4). The krater, illustrated in the MMA's Art of the Classical World (no. 184), was purchased from the Bothmer Purchase Fund.

Tsirogiannis notes that the krater appears in 5 Polaroid images from the Medici Dossier. The choice of background is more than significant. He observes that the krater surfaced through Sotheby's in New York in June 1989. This raises a question about the quantity of material that was consigned to New York from Medici. (Were the issues raised by Peter Watson's Sotheby's: Inside Story applicable beyond London?)

Will the Met be contacting the Italian authorities now that this new evidence has come to light?

Sofia Cecchi has interviewed Professor Ricardo Elia for the latest Journal of Art Crime (11, 2014, 85-86). Elia reveals that he first came across the issue of looting when he was excavating as a student in what is now FYROM. He reflects on his famous quote, "Collectors are the real looters". He comments on the weakness ("loophole big enough to drive a truck full of loot through") of the AAMD Guidelines over the acquisition of antiquities and ancient art.

He was asked about his quantitative study of Apulian pottery, and he finds claims made by Carlos Picon that acquisitions by New York's MMA are documented as "ridiculous". (It would have been interesting for Elia to have commented on Dyfri Williams' dismissal of his research.)

Elia is firm over the need to criminalize the looting of antiquities and calls for gaol terms and hefty fines.

The latest volume of the Journal of Art Crime is now available. It includes my essay on the so-called Crosby Garrett helmet timed to coincide with the public display in the British Museum.

The article considers the new evidence presented by the study of the reported find-spot. It returns to the issue of The Treasure Act and the need to make amendments.


Ansate brooches were rare finds, but metal-detecting has showed they were common part of A-S dress.so I made a gif http://t.co/dNGClEIrVX
— Rosie Weetch (@rosieweetch) May 17, 2014


I was very struck by the distribution maps for finds of Anglo-Saxon ansate brooches produced by Dr Rosie Weetch of the British Museum. It is very striking that the number of recorded "finds" increases from 2010 for both Norfolk and Suffolk. Weetch puts this rise down to the number of brooches recovered by metal-detecting.

It would be interesting to know how many Anglo-Saxon ansate brooches come from secure, excavated contexts.

What are the intellectual consequences if the majority of the brooches do not have secure contexts?

Circulating coins and MOUs: taking account of the evidence

Professor Nathan Elkins has written an important post "Import Restrictions and Coins: Lobbying, Duplicity, and Ancient Egypt's Closed Currency System" (May 14, 2014). He notes that while archaeologists stress the importance of including coins in MOUs, coin collectors do not.

I should declare an interest in the topic as I published a short study of the Ptolemaic coins linked to Arsinoe in the Peloponnese (further information here). 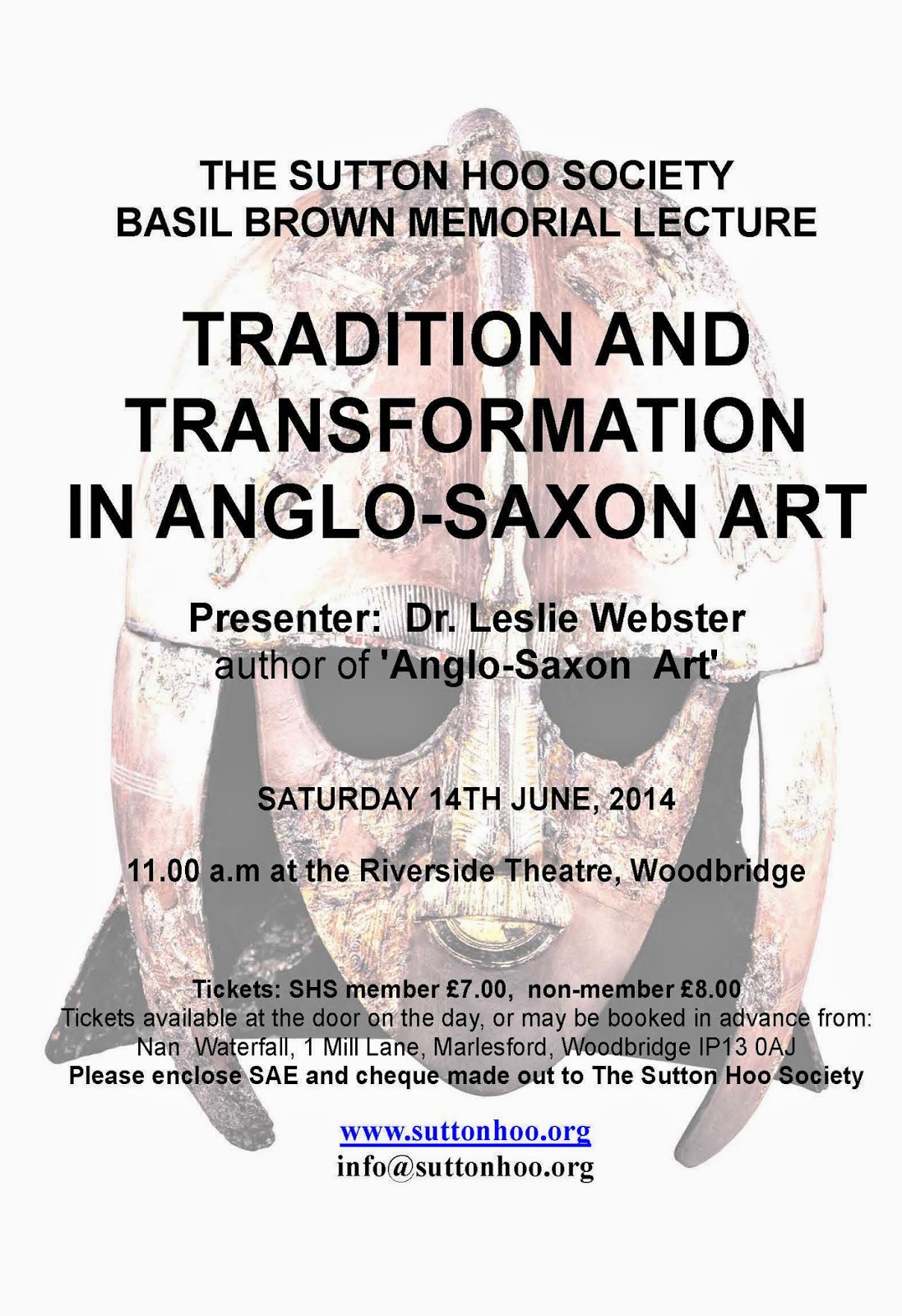 The Sutton Hoo Society is hosting the 2014 Basil Brown lecture, in this the 75th anniversary year of the Sutton Hoo excavations. Dr Leslie Webster will be lecturing on 'Tradition and Transformation in Anglo-Saxon Art' in Woodbridge on Saturday 14 June 2014.

The Onesimos-Euphronios cup returns to Cerveteri

The Onesimos-Euphronios red-figured cup that was returned from the J. Paul Getty Museum to Italy will be placed on display in Cerveteri (ANSA), the find-spot of further confiscated pieces. The cup is inscribed with a dedicated showing that it had been placed in a sanctuary of Ercle at Cerveteri. Additional fragments are known to have been supplied by Giacomo Medici. (For collecting history see here.)

Will this allow further information to emerge about the Met fragments?

My students, as well as readers of LM, will know that I have a strong dislike of the misleading term "provenance". I have written on this where I have suggested that we adopt two separate terms:


a. Collecting history: the way that an object passes from market to public or private collection.
b. Archaeology: the circumstances of discovery and removal from the ground.

Yet this is a term that museum professionals as well as academics working on cultural property issues use the term loosely. My twitter feed noted two recent examples:


Lehman: provenance is always something we are looking at. It can occupy years of work and it's not going away #ArtViews
— Art Museum Directors (@MuseumDirectors) April 28, 2014

My other emphasis is for the need for the identification of authenticated documentation. I have seen collecting histories based on documentation that appears to have been prepared for other objects.

So please can we tighten up the terminology?


The use of the term “provenance” when applied to archaeological material has been related to previous ownership. The collecting histories of over 120 items returned to Italy from North American collections have demonstrated the need for the careful and rigorous documentation of individual pieces. Such a history would chart the “life” of the object from the moment that it is discovered to the point when it is sold at auction or acquired by a museum or private individual. The impact of the scandal surrounding the “Medici Conspiracy” has led to the withdrawal of lots from a London sale in 2008, and a series of seizures from a New York auction house in 2009. The lack of collecting histories for individual objects suggests that the pieces were removed from their archaeological contexts, such as graves, by unscientific methods. The study argues that the widely used term “provenance” is essentially obsolete when applied to antiquities.

A Roman period stele from the sanctuary of Apollo at Saittai in Lydia, modern Turkey, has been recovered in Italy (" 1,800-year-old art...

David Gill
Professor David Gill is an Academic Associate in the Sainsbury Institute for the Study of Japanese Arts and Cultures and a member of the Centre for Archaeology and Heritage at the University of East Anglia. He is a Fellow of the Royal Society of Arts (FRSA), a Fellow of the Society of Antiquaries (FSA) and a Senior Fellow of the Higher Education Academy (SFHEA).