Michael Lewis has been talking about metal-detecting as part of the V&A Culture in Crisis Programme. He has stressed the benefit about searching ploughsoil. But what about the findspot of the Lenborough Hoard?

Lewis moves to discuss why the metal-detecting community has not signed up to the revised Code of Practice.

He touches on the issue of possible "criminal" elements who are out to loot archaeological site, and give the "hobby" a tarnished reputation.

The interviewer, Laura Jones, asked about the loss of context as a result of metal-detecting. Lewis talks about finds from below the ploughsoil, and suggests that there needs to be immediate archaeological help. He mentions the Watlington Hoard and the wait needed before the excavation could take place.

Lewis discusses the Staffordshire Hoard (but see here) as one of his favourite finds.

It would have been interesting to hear Lewis talk about the so-called Crosby Garrett helmet and the accuracy of its reported find-spot.

Lewis and Jones fail to engage with concerns about the damage being sustained to the archaeological record in England and Wales. Jones even suggests that people at home will be "wanting to be part of this", and that the Scheme actively protects the archaeological heritage of England and Wales, an issue directly addressed by the forum piece in the Papers of the Institute of Archaeology.

Back in 2010 I was invited to write a forum piece, "The Portable Antiquities Scheme and the Treasure Act: Protecting the Archaeology of England and Wales?", for Papers from the Institute of Archaeology.

In the light of the discussion around Sam Hardy's analysis of open-source data on metal-detecting for cultural property, I thought that it would be interesting to see how the forum piece has been cited by using data from the publisher's website, Research Gate, and Google Scholar.

Alexander the Great from the Roman Forum

A marble head of Alexander the Great has been seized in New York (reported in "Judge Orders Return of Ancient Limestone Relief to Iran", New York Times 23 July 2018). It has been reported to have been purchased "in good faith" by the Safani Gallery in Manhattan. The head had passed through Sotheby's in December 2011 (lot 9) when its history was recorded as:

Metal-detecting in context and open-source analysis 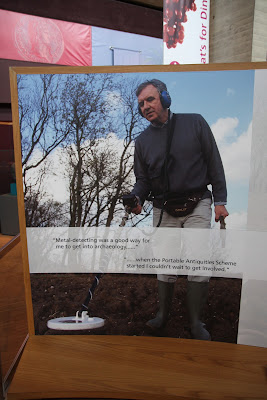 Sam Hardy has now written an extended response, 'a response to a response on metal-detecting and open-source analysis', Conflict Archaeology (26 July 2018). Deckers et al. will need to revise their confrontational response.

Earlier this month the Italian authorities issued a statement about Operazione Demetra with its focus on Sicily [press release, 4 July 2018; Carabinieri]. One of the key elements is that arrest warrants were served on individuals in London, Barcelona and Ehningen. They are listed as:
Veres appears to be the same individual who handled the Steinhardt gold phiale when it passed through Switzerland ('Caveat emptor', The Economist 16 September 1999). He also appears to have sold ancient coins, largely minted in Turkey, to the British Museum. (A British individual with the initials W.T.V. was arrested in an antiquities related incident near Seville in August 2017.)

This investigation appears to be shining fresh light on the network of handlers moving archaeological material from Italy.

The British Museum will no doubt be reviewing the material acquired from this source.

Liz Marlowe is looking for professors who teach courses on issues of cultural property/heritage/looting/archaeological ethics/art market, etc., who are based at a U.S. college or university with a campus museum.

She is looking for participants in what she hopes will be a large, important, Kress-funded project.