Lee Rosenbaum of Culturegrrl has published the second part of her interview with Timothy Potts who is moving from Cambridge to the J. Paul Getty Museum. Rosenbaum makes this striking statement:


What most startled me was his [Potts'] lack of thorough knowledge about the Getty's written antiquities-collecting policy, which is more stringent than the UNESCO Convention's guidelines regarding cultural property. (UNESCO's rules, ratified by the U.S., restrict museums from acquiring objects lacking a well documented, clean provenance that goes back at least to November 1970.)

In light of the Getty's history of past antiquities-related mishaps and scandals (which led to its adoption of its unusually strict policy), the failure of Getty officials to fully brief its prospective museum director (and to seek his concurrence) regarding these acquisition rules seems a significant omission, calling into question the current administration's wholehearted commitment to the policy put into place by the previous administration.

There is also a brief comment on the Douris cup acquired by the Kimbell Art Museum.

I suggest that LM readers read the transcript of the interview and make up their own minds.

W. Barksdale Maynard has presented an important report on the recent return of antiquities to Italy ("Art museum returns more ancient artworks to Italy", Princeton Alumni Weekly March 7, 2012). It is claimed that the museum initiated the return ("The University said the art museum undertook an internal analysis of items in its collections and then approached Italian authorities") and an agreement was signed in June 2011. This does not explain the report in the New York Times published in June 2010.

One matter of concern is that no definitive list of the publications has been issued by Princeton. Maynard's report notes:


Princeton declined to release any information relating to their acquisition or to provide identifying information that would allow the provenance to be tracked, citing a confidentiality clause in the agreement.

However it is possible to reconstruct the list using Princeton's own publication of its acquisitions.

My own concern about Princeton's lack of transparency is quoted:


Princeton values its integrity, but the silence of its museum, with its unwillingness to release details of the objects with their collecting histories, would seem to suggest that there is a deliberate lack of transparency ... This is in marked contrast to the Dallas Museum of Art and the Museum of Fine Arts Boston, which have published online pieces associated with Almagià so that there can be proper public scrutiny.

There is a response from James Steward, the director at Princeton:


very few museums, if any, have in fact a policy of ‘complete transparency’ relative to acquisitions. Indeed, past agreements with donors, gallerists, and others may preclude such transparency. We continue to value these relationships, just as we do the public trust that is placed in our museum, and we seek to acquit ourselves of that trust while honoring the privacy of the individuals with whom we work.

However we note that Steward maintains that Princeton “is profoundly committed to honoring the integrity of cultural property and to stamping out illicit trade of all kinds in works of art, and now has among the most rigorous acquisitions and loan policies in the museum industry.”

I am glad to read this.

I presume that Steward will now release details of any outstanding acquisitions where the collecting histories have been questioned. These include a Tyrrhenian amphora and a Villanovan hut. And what about the silver plaque acquired by Princeton?

And will he explain who recommended the acquisition of the pieces returned to Italy? And what was the nature of the rigorous acquisition policy that allowed them to pass into the possession of Princeton?

The Hellenic Ministry of Culture has released a list of 77 items stolen from one of the museums at Olympia.


Dealers in small Greek antiquities need to be on the look out for these objects.

Olympia theft: "it will be really difficult to get rid of them"

Some of the images of objects stolen from one of the museums in Olympia can now be seen in a video on (UK) Channel 4's website. Cambridge researcher Christos Tsirogiannis makes the important point that the objects are well documented and will be recognised if they are offered for sale.

This theft from a world-class heritage site is a crime against cosmospolitan society (not least in an Olympic year). Civilised commentators will condemn this act without reservation.

A short statement (in Greek) is available from the Hellenic Ministry of Culture.

Douris, Borowski and a new appointment


I have known Dr. Potts for almost fifteen years and have worked closely with him on policy positions taken by the Association of Art Museum Directors. I know him to be a person of integrity, intelligence, advanced learning, and refined connoisseurship.

The press release draws attention to Potts' acquisition of an Athenian cup attributed to Douris for the Kimbell (inv. AP 2000.02). The cup appeared in the Royal Ontario Museum exhibition, Glimpses of Excellence: a Selection of Greek Vases and Bronzes from the Elie Borowski Collection. A Special Exhibition---18 December 1984 to 30 June 1985 (no. 12). The cup was sold at Christie's Rockefeller Plaza New York (Ancient Greek Vases Formerly in the Private Collection of Dr. Elie Borowski on Monday 12 June 2000, lot 81 for $1.766 million. The Kimbell claims that after the Toronto exhibition the cup was "sold to a Japanese oil company, probably late 1980s". It is also claimed that Borowski had acquired the cup by 1977 (although the basis of this statement is not provided).

Borowski's name appears in the infamous "organigram" that features so centrally in the Medici Conspiracy.

I raised the earlier collecting history of the cup in my Fall 2009 review of James Cuno (ed.), Whose Culture? (2009) in the Journal of Art Crime. I also noted the Kimbell's ("temporary") acquisition of a "Sumerian" statue for a reported $2.7 million in 2000.

It would be interesting to learn more about Potts' position on recently surfaced antiquities. Lee Rosenbaum has a helpful transcript of Potts' response at the 2006 symposium on "Museums and the collecting of antiquities" (that forms the basis of Cuno's uneven Whose Culture?). Ralph Frammolino and Jason Felch have an assessment of Potts' appointment and comment specifically on the Douris cup.

The BBC (among other news outlets) is reporting a major theft from one of the archaeological collections in Olympia ("Thieves loot Greece's Ancient Olympia museum", February 17, 2012).


Two masked men smashed display cabinets and took more than 60 objects after overpowering a guard at the museum in Olympia, officials said.

This recalls the major theft of material from the Archaeological Museum in Corinth. Objects from that theft re-appeared at auction in New York.

Dealers in ancient art need to be on the look out for possible stolen objects.

The Daily Telegraph (London) has published a full obituary of Robert Hecht. The focus of the obituary is the sale of the Sarpedon krater to New York's Metropolitan Museum of Art but careful attention is paid to the implications of the Medici Conspiracy. The writer is well aware that there are many more antiquities to identify in European, Japanese and Asian Collections.


Yet welcome as they were, such acts of restitution were no more than gestures. Few doubt that hundreds of objects with dubious pedigrees retain pride of place in renowned collections, and that each year numerous others continue to come to market.

Museums in the UK will perhaps be wise to check to see which pieces in their holdings were derived from this controversial dealer. 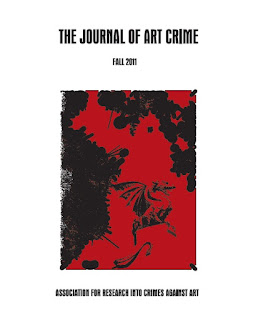 Readers of LM will be interested in the following:

Email ThisBlogThis!Share to TwitterShare to FacebookShare to Pinterest
Labels: ARCA

Details of objects associated with Edoardo Almagia can be found here:

Other museums linked to Almagià:

It appears that Robert Hecht died in Paris earlier today (February 8, 2012). Details have been posted by Jason Felch on LA Times (Culture Monster) ("Robert E. Hecht Jr., figure in antiquities case involving the Getty, is dead") although I have had separate confirmation from Rome.

Hecht, whose final years of life were dominated by his trial in Rome, was linked with a number of antiquities that were returned to Italy from North American collections (such as the Sarpedon krater and the Morgantina hoard plus antiquities in Boston, Cleveland and Princeton), as well as the infamous Athena II Fund. Other items include the Butrint Livia and antiquities in Copenhagen and other north European collections (including the UK).

Did the sale of the Sarpedon krater to New York's Metropolitan Museum of Art in 1972 lead directly to the passing of the 1973 AIA resolution? So perhaps Hecht was responsible (unintentionally!) for setting in motion the line of enquiry that led to the unmasking of the Medici Conspiracy, the return of well over 100 antiquities to Italy, and the damage to the reputation to some of North America's most prestigious museums.

While I have listed what appears to be the list of objects that have been returned to Italy from Princeton, there are still some items linked to Edoardo Almagià that are listed in the Record of the Princeton University Art Museum.


What are the full collecting histories of these pieces?

What other objects in Princeton have been purchased directly or indirectly from Almagià?

Boston's Museum of Fine Art has the following objects listed as linked to Edoardo Almagià (and noted back in 2010):
What is the identity of the Basel source for these nine pieces of Italian impasto ware that appear to have been derived from Lazio?

It is now reported by Chasing Aphrodite that the J. Paul Getty Museum acquired an Attic red-figured cup attributed to the Marley painter from Edoardo Almagià in 1986 (inv. 86.AE.479 [Beazley Archive 41037]). The cup was listed as "New York market". There is now the added information that it was purchased in Switzerland and found in southern Italy.

I am grateful to Todd Smith, Executive Director of the Tampa Museum of Art, for clarifying which item in the collection is linked to Edoardo Almagià. The piece is an Apulian loutrophoros attributed to the White Sakkos painter acquired in 1987 from a private collector (inv. 1987.037). The private collector is reported to have purchased the pot from Almagià.

An Apulian loutrophoros features in an article by Michael Padgett ("A modern delight at the Tampa Museum of Art", Tampa Bay Magazine January / February 1991, 29-31 [p. 30]).  It is recorded as the gift of Mr & Mrs C.W. Sahlman.

Tampa also holds pieces from the Keros haul of Cycladic figures. They, too, are derived from the Sahlman family.