Martin Bailey has discussed the pillage of antiquities that had been stored in a secure location in Benghazi ("Interpol confirms Libyan treasure was looted", The Art Newspaper November 2011). The material seems to have been found during the Italian occupation of Cyrenaica.

This seems to contain Greek, Roman and Byzantine material.

Dealers and galleries that handle archaeological material will need to insist that they see authenticated documentation for any recently surafaced objects.

Email ThisBlogThis!Share to TwitterShare to FacebookShare to Pinterest
Labels: Libya

Rick St Hilaire has a discussion of the ACCG's decision to file an appeal over the Baltimore Test Case. He clearly thinks that they are on very weak ground.

Rick St Hilaire has posted an important Australian documentary on looting in Bulgaria. This is a good reminder about what is at stake in the cultural property debate.

Bulgaria, Belize and the MOU

The Archaeological Institute of America (AIA) has posted details of the proposed MOUs with Bulgaria and Belize. Links to the online submission process can be found here.

SAFE has published a useful set of links about Bulgaria. 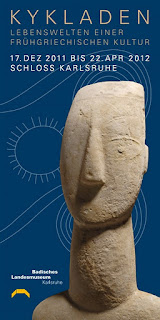 I have commented earlier today on the claim on two pieces in the Badisches Landesmuseum in Karlsruhe. We should note that Lord Renfrew is due to lecture in Karlsruhe on 23 February 2012 as part of the activities surrounding the exhibition. He has spoken out about the looting of archaeological sites in the Cyclades.

There is a suggestion that the Cycladic figure and bowl were derived from Dr Elie Borowski. Will the museum confirm or deny that Borowski was the source? I note that the museum acquired several pieces, including at least two Cycladic figures, in  1975.

It appears that the Hellenic Ministry of Culture has asked the Badisches Landesmuseum in Karlsruhe to return two pieces to Greece. They appear to be a marble Cycladic figure and a Bronze Age dish (that I also assume is Cycladic). Both pieces were purchased in 1975 after the 1970 UNESCO Convention.

The request appears to have been made as part of the condition to lend material to the Cycladic exhibition due to be mounted by Karlsruhe from December 2011 (details).

Harald Siebenmorgen, the director of the museum, is reported to have rejected the Greek request.


Siebenmorgen said they were purchased with public funds in 1975 and Greece had no legal claim to them, because of the moratorium on civil claims and Germany had not signed a convention on restitution of art treasures until 1992.

Siebenmorgen told SWR 2 television that a linkage between restitution claims and loans was 'not the international custom at all' and said it was 'like extortion.'

This raises several issues. The acquisitions were made after 1970, and Siebenmorgen will be aware that major North American museums have complied with Italian requests for the return of material that was acquired post 1970 (even though the USA had not become a signatory at that date). What is the full collecting history of the two disputed pieces? Is there good reason to believe that they were looted from archaeological sites in Greece?

Greece has been asked to loan archaeological material to an exhibition and its officials have every right to expect the highest ethical standards from the museum organising the Cycladic show.

Research by Gill and Chippindale has demonstrated the significant impact of looting on the archaeological record of the Cyclades, highlighted, in part, by an earlier exhibition of Cycladic material in Karlsruhe. I would have expected Siebenmorgen to have adopted a more positive and conciliatory approach to the Greek request.

A meeting of the US Cultural Property Advisory Committee (CPAC) will be taking place in November to consider possible MOUs with Belize and Bulgaria [formal notice].

Some recent stories and reports (not all on LM):

The Greek press has reported that a number of antiquities have been seized in Macedonia, northern Greece (ANSA October 10, 2011). Two Greek nationals were detained during the operation. The 120 or so objects included "four helmets, golden masks, golden rings, sword fragments and other objects". The finds are reported as being similar to those found in the sixth century BCE cemetery at Sindos.

It was suggested that the two individuals were about to sell the pieces to collectors outside Greece. The report also hinted that objects with "good" recording histories are in such short supply that newly surfaced antiquities are required to top up the depleted "reserves".

I have already had cause to comment on the impact of the Comprehensive Spending Review on the Portable Antiquities Scheme in Wales. This will be the responsilbity of Huw Lewis, Welsh Government Minister for Housing, Regeneration and Heritage. Lewis shared his vision of how "heritage" could contribute to the economy of Wales at the 2011 Hay Festival.

Archaeologist Paul Barford has launched a new blog, "Na i PAS ar gyfer Cymru: No to a Welsh PAS", where he suggests that Wales could adopt a radical and distinct solution to the issue of the removal of portable antiquities from the archaeological record.

The Greek terracotta protomai from a London private collection (lot 69) appear to have remained unsold in today's sale in spite of an estimate of £40,000-£60,000. Another item that appeared to feature in a certain Swiss dossier also remained unsold.

The pieces were not withdrawn despite concerns about their earlier collecting histories. Had the Italian authorities contacted Christie's? Did Christie's decide to press ahead anyway?

The sale fetched just under £3.5 million. One of the highest prices was a Roman bronze portrait head from an anonymous German collection formed in the 1980s (lot 145).

Email ThisBlogThis!Share to TwitterShare to FacebookShare to Pinterest
Labels: poetry

Greek responses to Symes material on the London market: update

Devolved government in Wales has meant that responsibility for the Portable Antiquities Scheme now rests with the National Museum of Wales (in Cardiff). PAS does not appear to feature on the Welsh Government website.

I notice that The Ian Potter Museum of Art at the University of Melbourne will be hosting an exhibition later this month: "Treasures: antiquities from Melbourne private collections" [press release]. The exhibition places private collecting in the context of the European Grand Tour and we are told, "The subsequent dissolution of these European collections created the majority of the objects circulating in the antiquities market today". The statement continues, "Melbourne is fortunate to have a number of important private collections of Greek, Roman, Egyptian and Near Eastern objects".

Andrew Jamieson, the curator in charge of the exhibition, has revealed in an interview that some 10 private collectors are represented (Melbourne Yarra Leader, October 3, 2011).

The University of Melbourne has received loans of Attic and South Italian pottery on previous occasions.

We look forward to seeing the complete list of the exhibits along with their collecting histories.

Greek responses to Symes material on the London market

The Greek press has responded to the appearance of ex-Symes material at a London auction this week.


Although the photographic archive was seized within Greece, the terracottas appear to be from one of the Greek colonies in southern Italy.

From Switzerland to Belgium

I recently wondered the source of objects sold by Galerie Archeologia in Brussels. It appears that some of the stock passed through Switzerland.

Due diligence and the auction houses

I have discussed earlier this year the issue of due diligence and what auction-houses could do when objects are identified from seized photographic archives (April 2011). I have also addressed the issue of whether or not the Italian authorities should release images that were seized (June 2011).

Auction-houses are quite capable of conducting their own due diligence searches when they are alerted to potential problems (April 2011). Some choose not to do so.

So what are the issues:
a. Are buyers provided with the full and accurate collecting histories ("provenance") for the objects they acquire?
b. Are buyers alerted to potential problems over disputed ownership?
c. Who are the anonymous vendors?

Email ThisBlogThis!Share to TwitterShare to FacebookShare to Pinterest
Labels: due diligence, polaroids

After 19 years in Swansea we will be moving back to East Anglia. I have been awarded a chair in Archaeological Heritage, and will be serving as Head of the Division of Humanities at University Campus Suffolk. I am looking forward to working with new colleagues and students in Ipswich, as well as the wider research networks from UEA and the University of Essex.

We have been reassured that Christie's "do[es] not sell works that we have reason to believe are stolen" (May 2010). G. Max Bernheimer, International Head of Antiquities at Christie's , has stated, "Provenance has always been important, and in light of recent repatriation issues, it has become paramount" (May 2010). More recently Bernheimer has commented (March 2011):


"Buying through an auction house, where due diligence is incredibly thorough and everything is openly published in the catalogue, limits the possibilities over ownership and repatriation issues later on."

Indeed he is quoted as saying, "Christie's sells only objects that it can confirm as legitimately acquired" (February 2011). Moreover, in 2009 a spokesperson for Christie's described objects identified from seized photographic archives as "stolen".

Yet in May 2010 Christie's (New York) pressed ahead with the sale of a number of items that had been identified in spite of calls by Paolo Ferri for the objects to be returned. Questions have also been raised about the recorded collecting histories of lots (April 2011).

So what will Christie's (London) do if they are requested to withdraw material by the Italian authorities this week? And have the full collecting histories been disclosed to potential buyers?

The illicit trade in looted archaeological material is a significant threat to the legitimate activities of those involved with the antiquities market. It is in the interest of auction-houses and dealers to co-operate with law enforcement agencies when dubious items have been identified. Ignoring requests to withdraw material from sales when collecting histories ("provenance") are questioned only reinforces the view that some within the trade are unconcerned about the destruction of the archaeological record.

The Schinoussa Archive and Italian Antiquities

The Schinoussa Archive is proving to be raising interesting questions about antiquities that are surfacing on the market. This pair of Greek terracottas look remarkably similar to a pair (once in a London "private collection") that passed into a North American private collection and are due to be auctioned at Christie's in London on 6 October 2011 (lot 69). Are they the same? Will Christie's reveal the identity of the London private collection? What had the due diligence search revealed?

Bonhams withdrew three ex-Symes Roman statues when their collecting histories became known. What will Christie's do in this case? Will they contact the Italian cultural attaché at the London embassy?

The Minneapolis Institute of Arts has announced that it will be returning a krater that it had acquired from Symes (or should that be a "London collector"?).

Potential buyers of antiquities need to be reassured that their purchases will not cause them problems in the future.