ISIS and The Missing Treasures 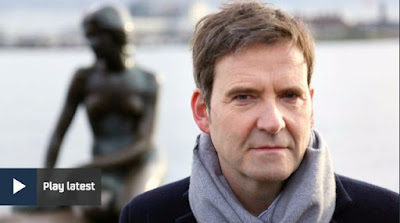 Reporter Simon Cox investigates the looting and subsequent sale of antiquities from Syria in this episode of Channel 4's Dispatches (18 April 2016). The programme discusses a lintel known to have come from Syria and on offer in London; a manuscript in Copenhagen; and an intercepted consignment.

The programme can be viewed here for the next 29 days.

Lintel from Syria for sale in London

Reporter Simon Cox talked about one of the objects from Syria that he identified for sale in London on BBC Radio 4 Today (18 April 2016; 2:53).


Despite their stated aim of destroying ancient cultural heritage, the so-called Islamic State have been looting Syria and Northern Iraq and selling the antiquities they find to raise money for their activities. It has now becoming apparent that some of those artifacts may be ending up on the market in London. Simon Cox is the BBC’s investigative reporter and Dick Ellis is former head of the Metropolitan Police's Art and Antiques squad.

Cox reminds of the satellite images showing the amount of looting taking place in Syria. He talks about the offering of a lintel from Syria in a Mayfair gallery. He talks about the 'invoice' from 2007 but it does not give any details (and need not be associated with the lintel). He acknowledged the difficulty of identifying material that had been looted by IS.

Former police officer Dick Ellis is critical of the law enforcement agencies in the UK: "a perfect example of the laws not working", "not actively policed by the police in the country". He points out the legislation that could be used to enforce interception. He also reminds us that the Art and Antiques Squad only operate 'for London'.

Today quotes the Home Office statement that mentions the way that it consults museum officials.

Cox was the reporter for BBC Radio 4's File on 4 investigation in February 2015.

It will be interesting to read the text and presentations of some of the talks at the Heritage Crime conference held at the British Library. It is clear that there are concerns about the following areas:
a. Thefts from museum collections
b. Church lead theft
c. Damage to and removal of objects from scheduled and previously unrecorded archaeological sites

The topic of nighthawking / metal-detecting on scheduled sites came up at the All Party Committee on Cultural Property at Westminster last month. It is worth noting that the two representatives from a certain national museum were remarkably silent on the subject, while some of us were drawing attention to examples of damage in various counties across East Anglia.

Tsirogiannis on Looted Antiquities and the Market 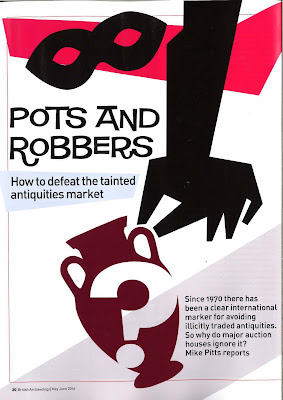 The latest number (May / June 2016) of British Archaeology has an extended interview with Dr Christos Tsirogiannis ('Pots and robbers: how to defeat the tainted antiquities market'). The report includes fresh images from the seized Symes assets in Switzerland.

Tsirogiannis reflects on the use of the Medici dossier and the Becchina archive for identifying recently surfaced antiquities.

James Ede and Julian Ratcliffe (Art Lost Register) are interviewed and speak about their perception of the archives. Ratcliffe suggests that the use of the archives to identify pieces only serves to "embarrass" members of the antiquities trade.

Tsirogiannis responds by pointing out the less than helpful way that certain named auction houses have responded when information has been passed to them.

There is a section in the report stating 'Christie's pledges to defeat trafficking'. The auction house is very defensive over criticisms of its due diligence process (highlighted again this week by failing to spot a very obvious ex-Medici piece with its Sotheby's London former collecting history).

A Roman Mosaic with a less than complete collecting history has been sold at Christie's in New York for $545,000, far above the estimate.

It is not clear why Christie's failed to mention that the mosaic had passed through the Ariadne Galleries, or why the leaflet was in the seized Becchina archive.

The new owner of the mosaic may be wise to ask further questions.

Two lots have been withdrawn from today's sale at Christie's in New York. They are:


The hydria had passed through a Sotheby's sale in London and should have alerted informed members of the antiquities trade that it could have been linked to the Medici operation. Were those checks made? And if not, why not?

The full collecting history of the janiform head is unclear.

All these identifications have been made by Cambridge-based researcher, Dr Christos Tsirogiannis.

Once again Christie's has demonstrated that its due diligence process lacks the necessary rigour to prevent such material surfacing on the market. Is it time for the Directors of the auction house to put new guidelines in place?

The present due diligence process adopted by some auction houses is not fit for purpose. I made this point at a recent meeting of the All Party Committee on Cultural Heritage.

Dr Christos Tsirogiannis has now identified three pieces due to be auctioned at Christie's New York tomorrow (12 April 2016). The fact that part of the collecting histories have not been included in the details suggests that either the auction house had not been diligent in establishing the collecting history (inappropriately called "provenance") or that this information had been inappropriately stated (and that the due diligence search had not picked up the discrepancy).

The three pieces are as follows:

Tsirogiannis has identified that the mosaic appears to feature on an Ariadne Galleries leaflet that forms part of the Becchina archive.

We should recall that the association between Becchina and Ariadne Galleries has been noted elsewhere. (And the Ariande Galleries are linked to the unreturned Icklingham Bronzes.)

Christie's needs to disclose where the Ariadne Galleries fit into the collecting history. Are they represented by the US Private collection? Was the mosaic consigned by Becchina? What was Becchina's source?

The 1987 Sotheby's London auction should have alerted anybody conducting a due diligence search. Tsirogiannis has identified this hydria from the Medici Dossier. Did Christie's contact the Carabinieri to double check that the hydria did not feature in the photographic archive? And will the Charles Brickbauer collection be returning the hydria?

Tsirogannis has identified this head showing Zeus Ammon and Alexander the Great from the Becchina archive.

Christie's should have been aware of the issues as they auctioned another janiform head in 2009 that had to be returned to Italy. Again it suggests that the due diligence process lacked the appropriate level of rigour.

Christie's once again has managed to offer objects at auction that should have been picked up in a rigorous due diligence process.

Perhaps members of Christie's staff could learn from a similar case at Bonhams back in 2010, i.e. some six years ago.

Earlier today I posted on the adoption of a new due diligence process.

It was, of course, pure fiction (note the date).

But is it a process to which responsible auction houses, galleries, dealers and trade associations should aspire?

The content of the post lay at the heart of the evidence presented to the All Party Committee on Cultural Heritage.

Is it about time that the due diligence process was tightened and strengthened to protect potential buyers?

Email ThisBlogThis!Share to TwitterShare to FacebookShare to Pinterest
Labels: due diligence, Parliament

A major international auction house has announced today a new rigorous due diligence process for antiquities (archaeological material). It has recognised that the looting of archaeological sites, especially in Italy, Greece, Turkey and Egypt, to provide material for the market is unsustainable in the long term.

A spokesperson for the auction house indicated that the internationally recognised 1970 UNESCO Convention would be the new standard, although existing national and international laws would be taken into account.

This means all lots will be subject to a rigorous process to establish the full collecting history (historically known as the 'provenance'). This includes the authentication of all supporting documentation.

The auction house also recognises that the consultation of online databases of 'stolen' objects do little to identify recently looted objects.

The auction house expects the value of its lots to rise as potential buyers are reassured by the security of their purchases.

It is expected that this new process will be adopted by other auction houses, galleries, dealers and their related trade organisations.