A black granite statue of the Pharaoh Amenhotep III has been recovered during a police operation to recover weapons and drugs at Al-Nakhi in Egypt (Archaeology magazine).

Email ThisBlogThis!Share to TwitterShare to FacebookShare to Pinterest
Labels: Egypt

The New Year's Honours List 2016 includes Dr Sharon Webb of the Kilmartin Museum for her services to heritage and archaeology in Scotland. I would like to add my congratulations to Sharon and the Kilmartin team.

The Roman fort at Bradwell on Essex formed part of the Saxon Shore series of fortifications stretching from Portchester in Hampshire to Brancaster in Norfolk. The site of Bradwell is stunning with its views over the Essex salt marsh. A Saxon chapel was built over the fort's west gate and includes reused Roman material.

It now appears this historically significant site has been the target of metal-detectorists. It is reported today (Cahal Milmo, "'Nighthawks': Tracking the criminals plundering ancient sites with the latest equipment", The Independent December 30, 2015):


Another Roman site at Bradwell in Essex was attacked earlier this month, leaving the landscape pockmarked with tell-tale holes.

Essex police are conducting Operation Chronos at the moment, and PC Andy Long is quoted in the report:


People in this country love their heritage. If someone came along and started removing the stones from Stonehenge, there would be outrage. When a Saxon necklace is taken out of the ground illegally it is the same thing. You are changing the story of the landscape.

This deliberate damage to archaeological sites will continue until a clear message is delivered that such actions are unacceptable.

Looting Matters: Looking Back Over 2015

Readers of LM will have noticed that I have been blogging less on cultural property issues (though broader heritage issues are discussed on "Heritage Futures" written with my colleague Professor Ian Baxter). I started the year with a number of predictions, some of which appear appear below.

Syria and Iraq
2015 has been dominated by archaeological destruction in Syria and the debate about the amount of archaeological material turning up on the European market, particularly in London. In January there was a major conference on the scale of the problem at the British Academy in London. This topic was the focus of a carefully researched BBC File on 4 documentary. Sites in Syria and Iraq have been deliberately destroyed (e.g. Mosul, Nimrud, Temple of Bel at Palmyra, Temple of Baal Shamin at Palmyra). The red list for Syria can be found here. Archaeological material from Syria continues to be intercepted.

Cuneiform tablets were intercepted at Memphis.

United Kingdom
It is a year since a major Anglo-Saxon hoard was unearthed at Lenborough. During the year there has been much debate about the use of metal-detectors on undisturbed archaeological sites. There is a need to revisit the issues raised by a forum piece for the Institute of Archaeology.

There are reports of heritage crime at the world heritage site of Hadrian's Wall. The BBC raised the issue of so-called "nighthawking". Operation Chronos was launched in Essex. A Roman altar was stolen from Stenhouse museum in Cumbria, as were the heritage signs at Woodhenge. The Heritage Alliance released its manifesto for heritage prior to the UK General Election. The dangers of metal-detecting at Icklingham were revealed.

Switzerland and the Becchina Archive
The Italian Government revealed the quantity of material recovered from warehouses linked to Gianfranco Becchina in Switzerland.

The Michael C. Carlos Museum at Emory University continues to retain objects derived from Greece that have been identified from the Becchina dossier. The same is also true for the Archaeological Material in Madrid where material from Italy has been identified. Other items in a UK museum have been linked.

A statue of Mithras was seized in Italy as it was being transported to Switzerland.

Italy
Further links were made between the Dietrich von Bothmer collection and Italy. A bronze statue stolen from the museum in Pesaro has been returned from the US after being seized in a Manhattan auction-house. The Horiuchi sarcophagus was returned to Italy. The US authorities also returned a range of material to Italy. Details can be found here.

US Museums
Marion True has represented her version of events surrounding her links with antiquities.

Greece
The Koutoulakis herm was returned to Greece.

Part of the Parthenon architectural sculptures were loaned to Russia showing that the British Museum is willing to display this part of world heritage outside the UK.

Papyri and Coins
The collecting history of the "Sappho Papyrus" continued to be debated. There has been equally impassioned discussion of the Gospel of Jesus' Wife.

An important study of coins on the market was published by Nathan Elkins.

The Antiquities Market
Concerns about the antiquities market continue to be raised. This includes glass from Egypt turning up in London. Christie's has again had to withdraw objects from sales in April, October and December. Wider issues about the due diligence process have been raised. The overall value of sales of antiquities in New York appears to be diminishing.

India
The National Gallery of Australia returned material to India. Related material has been returned from Honolulu.

Further Research
The need for further research into Art Crime was made by Lynda Albertson at a conference at Queen Mary's University of London.

There are reports that Syria would like details of some 2000 objects seized in Turkey (Shadia Nasralla, "Syrian antiquities chief says Turkey refuses to return looted art", Reuters, December 11, 2015). What is important about this report is the note on the level of seizures:


The 2,000 objects seized in Turkey compare with 6,500 recovered by Syrian authorities from smugglers, 300 seized by Jordanian authorities and 90 returned to Syria from Lebanon since the beginning of the war, according to Abdulkarim.

Earlier in the year BBC reporter Simon Cox reported on some of the material that had been seized in Lebanon ("Are looted antiquities from Syria funding IS?", BBC News February 18, 2015). These reported seizures are likely to be the tip of the iceberg. Where is the other material that has not been intercepted?

Cox was able to identify some material that was appearing in London ("Islamic State: Looting for Terror", BBC File on 4, February 22, 2015).

I would like to wish all readers of Looting Matters a very Happy Christmas.

I am sure that our thoughts are with those communities in the Middle East who are facing daily dangers and uncertainties.

Just one year ago the Lenborough Hoard was removed from a Buckinghamshire by less than scientific means. An appeal is now underway to raise money to buy the coins for the Buckingham County Museum: it has raised £12,000 ("Lenborough Anglo Saxon coin hoard pledges reach £12,000", BBC News 19 December 2015).

The money raised is hoped to persuade "funding bodies" to meet the balance, perhaps in the region of just under £1.3 million.

The account of the find raises several issues about the holding of "rallies" on sites that appear on the Historic Environment Record.

In 1955 Lord Harlech described the hill fort at Old Oswestry as 'perhaps the most elaborate in the country'. The English Heritage Heritage Unlocked book on the Midlands describes its earthworks as 'among the most impressive of any British hill fort'.

Yet this week Shropshire County Council voted to damage the landscape setting of this important monument. Full details are available on the Heritage Journal ("Is The Campaign to Protect Rural England the best heritage conservation body?", 18 December 2015).

This is a huge disappointment to those of us who value Britain's archaeological and built heritage. 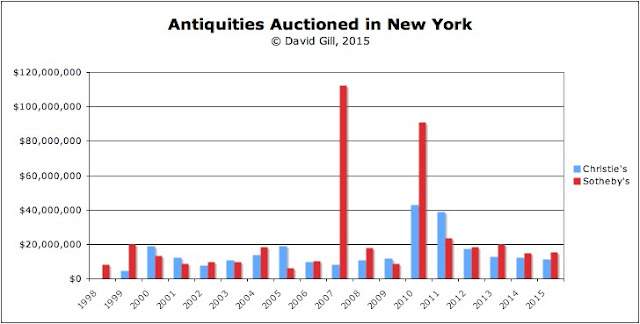 The two major sales of ancient art at Christie's and Sotheby's took place in New York this week. The four sales of ancient art throughout the year raised some $26 million, half a million dollars down on 2014. Once again Sotheby's sales raised more than Christie's: $15.3 million against $10.9 million. This is the fourth year in succession where Sotheby's has been ahead. Sotheby's sold slightly more than in 2014, whereas Christie's were significantly down (at 2008 levels).

We should also note the move to the title 'Ancient Egyptian Sculpture and Works of Art' at Sotheby's for the December sale.

Lot 101, the Canaantite deity, that had been spotted by Dr Christos Tsirogiannis in the Symes-Michaelides archive was left unsold at auction today.

Christie's New York has withdrawn lot 45, 'Celtic dagger and scabbard'. This is no doubt linked to its appearance in the Becchina photographic archive and undeclared in its collecting history.

Lot 101, the Canaanatie bronze figure, remains in the sale even though it appears in the Symes Michaelides archive. Did Mathias Komor acquire this directly from Symes? What is the full collecting history of the figure? Did Christie's know that it had been handled by Symes but had chosen not to declare this part of the collecting history in case it raised concerns with potential buyers?

The antiquities team at Christie's would do well to reflect on the implications of overlooking such collecting histories.

Two further antiquities due to be auctioned at Christie's New York on December 9, 2015 have been identified by Glasgow University researcher, Dr Christos Tsirogiannis.

When did lot 45 pass through the hands of Becchina? When did lot 101 for part of the stock of Robin Symes?

These two examples suggest that the due diligence process used by Christie's in New York is unable to identify such recently surfaced pieces.

Such identifications appear on a regular basis and can only serve to undermine buyers' confidence in the market.

We presume that Christie's will now be contacting the relevant authorities to clarify the situation.

Christie's New York have withdrawn a Canosan terracotta figure of Zeus and Ganymede from their December 9, 2015 sale (lot 36). It comes from 'an Important American Collection'. The reported collecting history is as follows:

Yet there is documentation in the Becchina archive suggesting that this was in his possession in January 1995. Why is this part of the collecting history absent from the above list? Does Becchina sit between Froelich and Fortuna Fine Arts? What is the authenticated documentation that this figure was in the possession of Mussienko and Froelich?

Will Christie's be stating why this lot was withdrawn?

I am grateful to Glasgow University researcher, Dr Christos Tsirogiannis, for this information.