Marble bull's head from the temple of Eshmun

Excavations at the temple of Eshmun in Lebanon recovered a marble bull's head. It is now suggested that it was this head, apparently first published in 1967, that was placed on loan to New York's Metropolitan Museum of Art (Tom Mashberg, "Met Museum Turns Over Another Relic With Disputed Past to Prosecutors", New York Times August 1, 2017 ). The head is reported to have been handed over to the Manhattan district attorney after a request was received from the Lebanese authorities.

It is suggested that the head may have been looted from an archaeological storage area at Byblos in the 1980s during the Lebanese civil war. Mashberg has rehearsed the recent collecting history:


The owners of the bull’s head, Lynda and William Beierwaltes of Colorado, say they have clear title to the item and have sued Manhattan prosecutors for its return.

The Beierwaltes bought the head from a dealer in London in 1996 for more than $1 million and then sold it to another collector, Michael H. Steinhardt, in 2010. Mr. Steinhardt lent the relic to the Met that year, but after learning that Lebanon was disputing its provenance, he asked the Beierwaltes to take it back and compensate him.

The London based dealer has not been named although other legal papers identify one of their sources (discussed by Christos Tsirogiannis, "Mapping the supply: usual suspects and identified antiquities in ‘reputable’ auction-houses in 2013." Cuadernos de Prehistoria y Arqueología 25 [2015] 107-44 [esp. p. 135] ).

William G. Pearlstein, who is acting for Beierwaltes is reported to have said:


“We believe the district attorney’s position is ill-founded, ... The Beierwaltes are bona fide purchasers with clean hands. By contrast, for more than 50 years, Lebanon has failed take any action domestically or internationally to report any theft of the bull’s head.”

As a point of correction, if the head was published 50 years ago, and the civil war was taking place in the 1980s, then the possible removal from the storage facility was only 30 years ago.

The Metropolitan Museum of Art is quoted:


“Upon a Met curator’s discovery that this item on loan may have been stolen from government storage during the Lebanese civil war, the museum took immediate action. We contacted the Lebanese government and the lender, we took the item off display, and we have been working with federal and state authorities, which recently involved delivering the head of the bull to the Manhattan D.A. upon its request.”

I am sure that Beierwaltes will disclose the name of the London-based dealer who supplied the bull's head. From there it should be possible to identify the source of the head.

The Toledo skyphos and a Swiss private collection


The Attic red-figured skyphos attributed to the Kleophon painter in the Toledo Museum of Art (inv. 1982.88) is now coming under further scrutiny following the research of Dr Christos Tsirogiannis. The skyphos shows Hephaistos returning to Olympos.

Tsirogiannis has identified what appears to be this skyphos in five photographs in the Medici Dossier. The museum acknowledged that the skyphos had resided in a 'private Swiss collection'. Tsirogiannis suggests that this is probably a reference to Medici.

Enquiries to the museum by Tsirogiannis elicited the information that the skyphos had been acquired from Nicholas Koutoulakis (although that information does not appear on the museum's online catalogue).

The curatorial team at the Toledo Museum of Art will, no doubt, be contacting the Italian authorities to discuss the future residence of the skyphos.

For further discussion of the Toledo Museum of Art on LM see here.

In May 2014 I commented on a Paestan krater acquired by New York's Metropolitan Museum of Art after it had been identified by Dr Christos Tsirogiannis in photographic images seized from Giacomo Medici. Tsirogiannis published his full concerns in the Journal of Art Crime in 2014, but it has taken a further three years for the museum to respond.

The krater showing Dionysos in a hand-drawn cart was purchased in 1989 from the Bothmer Purchase Fund (details from the Museum's website, inv. 1989.11.4). The krater surfaced through Sotheby's New York in June 1989.

It is unclear who consigned the krater to Sotheby's New York.

It has now been revealed that the krater has been handed over to the US authorities after a warrant had been issued (Tom Mashberg, "Ancient Vase Seized From Met Museum on Suspicion It Was Looted", New York Times July 31, 2018).

It appears that the museum did make an attempt to resolve the case in December 2016. Mashberg notes:


The Met, for its part, disputed the suggestion that it had ignored warnings about the vase. Officials said the museum had noticed Dr. Tsirogiannis’s published research in 2014 and, indeed, had been troubled by the reappearance of Mr. Medici’s name in connection with an artifact. They said they reached out informally to the Italian authorities then, but received no response. The museum said that in December 2016 it sent the Italian Culture Ministry a formal request to resolve the case. The Met said it was awaiting guidance from the Italians when Manhattan prosecutors alerted it in June to their own concerns.

It is to be welcomed that the museum has eventually responded to academic concerns.

It is a reminder to other museums that are holding material identified from the Becchina, Medici and Symes photographic archives that they need to engage with the due diligence process and to act ethically and professionally. 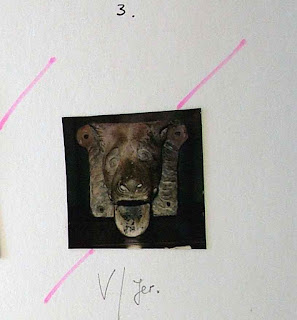