Context Matters: Collecting the Past

I have been associated with ARCA for the last ten years, and its publishing arm, ARCA Press, will be issuing a series of essays later this year.

Context Matters is based on the twenty essays contributed to the Journal of Art Crime over its first ten years. They are supplemented by articles and review articles that were published alongside them. The chapters were written as museums in Europe and North America were facing a series of claims on recently acquired objects in their collections in the light of the photographic dossiers that had been seized from dealers in Switzerland and Greece. They engage with some of the recent debates over cultural property that include the Ka Ka Nefer mummy mask currently in the St Louis Art Museum, and the Leutwitz Apollo acquired by the Cleveland Museum of Art. Two of the essays reflect on the recent and controversial metal-detecting finds in England, the so-called Crosby Garrett helmet and the Lenborough Hoard. The volume contributes to the wider discussion about the appropriate due diligence process that should be conducted prior to the acquisition of archaeological material.

The essays will be grouped around the following themes:
The book will come out next Fall, but there is currently a Kickstarter campaign on in which books can be pre-ordered.

Please have a look and consider pre-ordering Context Matters …and in the process supporting a good cause, as this campaign seeks to raise scholarship funds.

Email ThisBlogThis!Share to TwitterShare to FacebookShare to Pinterest
Labels: ARCA

Cadbury's, Treasure and Damage to the Archaeological Record

LM has consistently commented on the damage to the archaeological record sustained by unscientific digging. In the UK, and specifically in England and Wales, LM has discussed the damage sustained by (some) metal-detecting. I was asked by the editors of the Papers of the Institute of Archaeology to write a forum piece on the issue. Subsequent published research has considered the cases of the so-called Crosby Garrett helmet, and the Lenborough Hoard. I have been present at a meeting of the Cultural Property APPG and heard members from a major national museum refuting comments about the looting of archaeological sites in East Anglia. Contemporary concerns about looting have been raised in a review article for Antiquity.

In this permissive culture there is little surprise that Cadbury's thought that it was acceptable to encourage individuals to go and dig up an archaeological site in order to find 'treasure'. The reaction from the archaeological community was resounding. People who would normally fail to hear the academic arguments were free to comment on social media.

The BBC ran a story, "Cadbury treasure hunt ad labelled 'stupid' by archaeologists" (17 March 2019), and now the Guardian has noted that the Cadbury's campaign has been suspended ("Cadbury pulls ad campaign that ‘advocates looting’", 18 March 2019). Minister Michael Ellis MP has even commented.

I have been told that the irresponsible @CadburyUK #FreddoTreasures campaign has been taken down. While we want young people to explore our nation's history, there are obviously rules in place under the Treasure Act to protect finds. This campaign puts that at risk.
— Michael Ellis (@Michael_Ellis1) March 18, 2019


Historic England issued a statement to the Guardian:

Is it time for the DCMS to strengthen the protection of England's archaeological record?

"Do whatever you can to avoid admitting the unattractive truth" 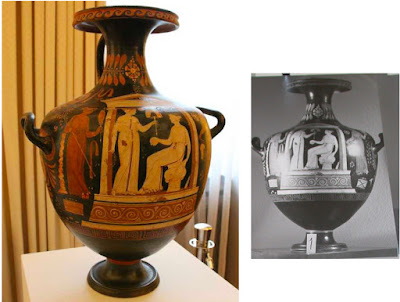 Peter Watson has written a short piece in The Times (7 March 2019) about the return of antiquities to Italy by Christie's. He reminds readers about how the story was revealed in The Times back in 2014, and that the identifications had, in part, been due to the research of Dr Christos Tsirogiannis. Watson writes:


The man who spotted the looted objects in the 2014 sales was Christos Tsirogiannis, a Greek-born forensic archaeologist. Though Christie's was aware of this tainted history, it still took it five years to persuade the consignors of these objects that they were looted. So it's a little rich for Christie's to talk of the "voluntary" return of these artefacts. It was embarrassed into doing so. A spokeswoman for Christie's conceded last week that Dr Tsirogiannis was right about the objects he spotted. She added that illicit antiquities were a minute amount of a predominantly "honourable" market.

See my comments on the Apulian hydria, the glass oinochoe, the Etruscan terracotta antefix, the satyr relief and the Roman sarcophagus fragment.

The press release from Christie's stated:


The works, that had been acquired in the past in good faith, were more recently identified as not having the required, verifiable title, export or provenance details needed to proceed with a sale and as such were returned voluntarily.

How did these two pieces end up being consigned to Christie's? Where have they been residing over the intervening three decades? Who has been handling them? Who has been passing the sculptures on 'in good faith'?

It has been announced that a museum in the Netherlands will be returning 139 Benin Bronzes to Nigeria. This will no doubt send a signal to other universal museums that hold Benin Bronzes that they may be the next to negotiate a return. The circumstances of the Benin Punitive Expedition that allowed so many of these pieces to enter European, and subsequently North American, collections should be a reminder to curators and museum directors that the histories of pieces should be re-examined. The decision to return the pieces is a tangible challenge to the position of retention that has been argued by James Cuno among others.


An Etruscan terracotta antefix was among the items returned to Italy from Christie's [see ARCA]. The piece had been recognised from the Medici Dossier by Dr Christos Tsirogiannis when it was offered at auction by Christie's in London on 15 April 2015 (lot 103) [see Looting Matters]. It had then been withdrawn, along with three other lots [see ARCA].

The antefix had surfaced at Sotheby's in London on 9 December 1985 (lot 273). (In 2009 Looting Matters had highlighted issues about objects surfacing through Sotheby's in 1985.)

Why does the Christie's press release fail to mention the link with the Medici Dossier and the identification by Tsirogiannis?


A glass oinochoe is among the objects returned to Italy from Christie's. This appears to be the one offered in the sale of antiquities on 2 April 2014 (lot 173). That particular oinochoe had surfaced at Sotheby's in London on 11 July 1988 (lot 173). The identification of the oinochoe with an image in the Medici Dossier [see ARCA] was made by Dr Christos Tsirogiannis [see earlier comments]. The piece was then withdrawn from the sale [see earlier comments].

Why has the official press release [Christie's] failed to mention either the Medici Dossier, or the research of Dr Christos Tsirogiannis?

Last month Christie's was reported to have returned eight antiquities to Italy [press release]. This initiative appeared to be a new one but it now appears that the objects may relate to historic cases. For example, the returned Apulian hydria attributed to the Varrese painter appears to be the one identified at the April 2015 Christie's sale [see Looting Matters] by Dr Christos Tsirogiannis from an image in the Becchina archive.

One wonders why this historic information as well as Tsirogiannis' contribution has been omitted. Back in 2015 I commented on why the hydria's history (and the histories of its companions) had not been spotted by the auction-house.