The J. Paul Getty Museum has issued a statement in response to the Italian court ruling over the Fano Athlete ("Statement from Ron Hartwig, spokesperson for the J. Paul Getty Trust, regarding the ruling in Pesaro on the Victorious Youth",  June 8, 2018).

We have just received the judge’s decision and are reviewing it. We are disappointed in the ruling, but we will continue to defend our legal right to the statue. The facts in this case do not warrant restitution of the object to Italy. The statue was found in international waters in 1964, and was purchased by the Getty Museum in 1977, years after Italian courts concluded there was no evidence that the statue belonged to Italy.

Moreover, the statue is not part of Italy’s extraordinary cultural heritage. Accidental discovery by Italian citizens does not make the statue an Italian object. Found outside the territory of any modern state, and immersed in the sea for two millennia, the Bronze has only a fleeting and incidental connection with Italy.

We very much value our strong and fruitful relationship with the Italian Ministry of Culture and our museum colleagues in Italy. Resolution of this matter must rest on the facts and applicable law, under which we expect our ownership of the Victorious Youth to be upheld.


There is no reflection on the effectiveness of the due diligence process that was conducted by the Getty prior to the acquisition. Nor is there consideration of the process that allowed the athlete to move from a fishing port in Italy to the Getty.

Some 50 holes have been noted in the vicinity of Brunton Turret (T26b), on Hadrian's Wall.


"We may never see or fully understand the objects taken or damaged because they have been removed from their original sites with no care or record as to their history or context.

"Historic England will continue to work with Northumbria Police, the Crown Prosecution Service and the metal detecting community to identify the small criminal minority who are intent on causing loss and damage to our shared cultural heritage and to bring them to justice."

Dr Christos Tsirogiannis has identified a Roman marble athlete from the Schinoussa photographic archive. The sculpture, "A Roman Marble Figure of an Athlete, circa 1st/2nd Century A.D.", is acknowledged as "perhaps acquired from Robin Symes". The photographic evidence can now confirm this part in the statue's history.

Tsirogiannis has observed that the statue in the Schinoussa archive is "uncleaned and unrestored, since soil encrustations are obvious on its surface".  Note also the damage to the right thigh.

What is the authenticated documentation that can confirm the statue's history? When did it surface? 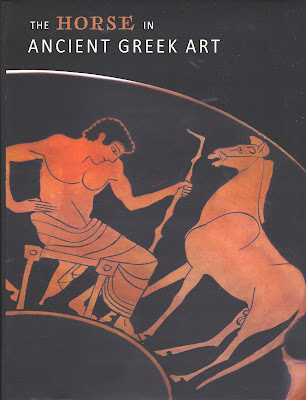 Back in February I write about some of the sources behind the objects in the collection. There is a consideration of material associated with Walter M. Banko of Montreal. More important is the identification of material derived from Fritz Burki that now resides in Virginia.

The paper also considers Apulian pots attributed to the Virginia Exhibition painter (some of which have been sold for the benefit of Columbia University).

I had written to the curatorial staff in Virginia to clarify some of the detail in the paper but, as I stated in the paper, I have yet to receive a reply.

The modern history of the piece is given as follows:


Collection of George Ortiz, Geneva, Switzerland; with Robin Symes, London, England; by 1989 and until 2000, collection of Howard J. and Saretta Barnet, New York; acquired in 2000, gift of the family of Howard J. Barnet.

It is not clear when the sphinx was acquired by George Ortiz. Was it before or after 1970? And why did Ortiz dispose of part of his "collection" to Robin Symes? How long was the sphinx held by Symes?

The Barnets also acquired a Geometric bronze horse from Symes. What other items were purchased from Symes? The Barnets are also associated with a cup fragment derived from Palladion Antike Kunst.

What is the history of the sphinx prior to Symes? When and where did it surface?

Attention has turned onto the collection formed by Mr. and Mrs. Howard J. Barnet due to the Geometric horse that was handled by Robin Symes (after it had surfaced). Questions perhaps need to be asked about how the Barnet collection was formed.

I note that a fragment of an Attic red-figured cup attributed to the Antiphon painter (by? that information is not provided) was presented to the Metropolitan Museum of Art in 1980 (inv. 1980.11.4). This piece had apparently been purchased from Palladion Antike Kunst in Basel, Switzerland in that same year.

Had this fragment passed through the Barnet collection, if only for a short length of time? Or had the Barnets provided the money to purchase the fragment? Who had proposed and recommended the purchase? Had the Barnets realised the associations with this gallery? Had they purchased any other objects from this particular dealer?

It has been reported today that the disputed Geometric horse that once passed through the hands of Robin Symes had been handled by previous owners (Laura Chesters, "Auction house Sotheby’s takes on Greece in landmark antiquities court case", Antiques Trade Gazette June 6, 2018). It is stated: "Sotheby’s argues that the horse was also owned by two other art and antiquities dealers before being acquired by Symes and had been sold at an “established and reputable European auction house” - Swiss auction firm Münzen und Medaillen in 1967."

I want to put to one side the question about when the Geometric horse left Greece: I can only presume that there is authenticated documentation that will be produced.

What is more puzzling is that there are now "two other art and antiques dealers" who owned the piece before Symes, and yet that part of the horse's history does not appear to have been divulged in the catalogue entry. Why was this information omitted? Given the horse had reared its head in Switzerland in 1967, such information would have filled out the history of the piece. And the disclosure of such information would naturally form part of a rigorous due diligence process. It also appears to undermine the catalogue entry: "very probably acquired at the above auction" [sc. 1967]. Indeed it now appears to be suggested that Symes did not appear to acquire the horse in 1967. When did the Sotheby's cataloguer (or cataloguers) become aware of this additional part of the history of the horse?

We should remember that the "established and reputable European auction house" was apparently the source for two other pieces that have been returned to Italy: one from Boston (acquired in 1977), and the other from the Getty (acquired in 1988). (The pieces are discussed in two separate articles in IJCP [here] [here]). I have, as yet, been unable to trace the history of these two pieces prior to their surfacing in Switzerland.

And that brings us back to the question: who consigned the horse to Münzen und Medaillen in 1967?

The Barnet collection is not without interest. ARCA has reminded us that a Laconian cup attributed to the Hunt painter that had been loaned periodically to New York's Metropolitan Museum of Art from 1981 (and acquired in 1999) has been returned to Italy (and listed here). This fact makes the histories of objects in the former Barnet collection of especial and legitimate interest.

Source: Manhattan DA. It seems that another piece displayed in the exhibition, Glories of the Past , was seized from a NYC private collectio...