"Credible provenance" and the Minoan larnax 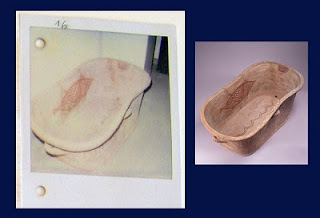 Back in September 2008 the Michael C. Carlos Museum spoke about the importance of a "credible provenance" or "history of ownership" in a press statement responding to Greek claims for three items in the museum.

As far as I can see the museum has never presented the authenticated collecting history (sometimes obsoletely termed the "provenance") for the Minoan larnax in its collection.

I have read the documentation on this piece and the photographic evidence from the Becchina archive is compelling.

I am also aware that the positive identification was made by Dr Christos Tsirogiannis.

We know that the "credible" collecting history for this larnax places it in the hands of Gianfranco Becchina. Why has it taken the Michael C. Carlos Museum seven years to ignore this "credible" evidence?

The BBC is now reporting that the Temple of Bel at Palmyra has been partially destroyed ("Syria's Palmyra Temple of Bel 'severely damaged' by IS", BBC News August 31, 2015). This is the latest in a sequence of deliberate destruction of this UNESCO World Heritage site.

The Minoan Larnax in the Michael C. Carlos Museum 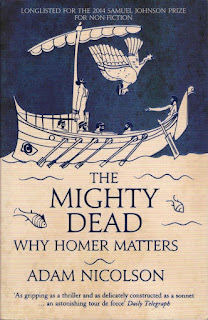 I am much enjoying Adam Nicolson's The Mighty Dead: Why Homer Matters (London: William Collins, 2014). I love the weaving of the literary landscapes and the application of Homer's works to contemporary society. And I am about to move from "Grasping Homer" to "Loving Homer".

The book has a series of "Homeric" (broadly speaking!) colour images: a gold mask from the shaft graves at Mycenae; inlaid Myceanean daggers; representations of the Homeric narratives on Athenian black- and red-figured pottery; a writing tablet from the Ulu Burun shipwreck; the walls of Tiryns; the "Homeric" cup from Ischia; an Egyptian ivory cosmetic container; the Kypselid gold phiale from Olympia.

And I wait to see how this diverse group of objects are woven into Nicolson's narrative.

But I am not writing a review. Readers of LM can always get a copy of the book for themselves. [Amazon.co.uk | Amazon.com]

So why am I writing about this book?

One of the colour plates shows "A Cretan bath from the mid-fourteenth century BC, one of the elements of Mediterranean civilisation most greedily adopted by Homeric Greeks".

The credit is "© Carlos Collection of Ancient Art, Emory University".

And we need to remember that part of Becchina's holdings was revealed in a major publicity event in Rome earlier this year. And this has implications for the Michael C. Carlos Museum.

Nicolson's book is a good reminder of why the museum staff at Emory University need to be contacting the Greek authorities as a matter of urgency. This case needs to be resolved not ignored. (See also the professional responsibilities for the museum.)

Ursula Kampmann has written about the continuing case of Gianfranco Becchina ("The Becchina case – or: a footnote to practical aspects of the return of cultural property", Coins Weekly August 27, 2015 [note that the article has been translated]). She notes that some 1278 objects were left without certain "provenance" --- what is clearly meant (and this is why I do wish that those writing about the market would differentiate between "collecting history" and "findspot") is that it was not possible to ascertain where those 1278 objects had been found. (And just to clarify, I suspect that the seized paperwork will provide some of the information about the "collecting history".)

Kampmann informs her readership that the 1278 objects could be returned to Palladion Antike Kunst for sale. But who would want to buy these objects? Could Greece, Turkey and who knows which other countries bring a claim once the objects have been matched to the paperwork? Buyers would be wise to be very cautious.

But it appears that 40,000 francs are outstanding as part of a court case and this has led to the confiscation of the 1278 objects. (And one can only think that if these items are unsellable, they are also likely to be valueless.)

Kampmann bewails the "incompetence of the authorities". But actually it highlights the network of deals and dealings surrounding this Swiss-based dealer.

Of course those who were buying directly from Becchina will now be very concerned that their actions will be revealed.

The BBC has circulated images of the destruction of the temple of Baal Shamin at Palmyra (Jonathan Amos, 'Palmyra: Satellite image of IS destruction', BBC News August 28, 2015). The satellite shots were taken on 25 August 2015 - and there is a comparison shot of 22 May.

The Google Earth image was taken in February 2014, and the temple of Baal Shamin can be seen at the top of the picture.

UNESCO on the Temple of Baal Shamin

UNESCO has issued a statement on the reported destruction of the temple of Baal Shamin at Palmyra.


UNESCO stands by all Syrian people in their efforts to safeguard their heritage, a heritage for all humanity

It is being widely reported that the temple of Baal Shamin at Palmyra has been deliberately destroyed. The temple featured in Robert Wood's Temples of Palmyra, otherwise Tadmor, in the desert (London 1753). The ruins had been observed in 1751 (with James Dawkins).

The temple carries an inscription, dated to AD 130/31, in the wake of the visit of the emperor Hadrian to the city. The temple was initiated by Malé son of Yarhai.

Parts of the sanctuary are dated epigraphically to AD 23.

I was asked to comment for the BBC with live interviews this morning for BBC 24 and BBC World, and prerecorded interviews for BBC World Service and BBC1.

Marion True may put her side of the story

Geoff Edgers ("One of the world’s most respected curators vanished from the art world. Now she wants to tell her story", Washington Post August 20, 2016) reports on Marion True's notes for a memoir.


... today, for the first time, she is talking openly about the way she and her museum-world colleagues operated. Yes, she did recommend the Getty acquire works she knew had to have been looted. That statement, though, comes with a qualifier:

If she found out where a work had been dug up from, she pushed for its return. In contrast, many of her colleagues did little, if anything, to research a work’s source. None of them were put on trial.

She described her position on recently surfaced material:

I have commented on Marion True's position on a new ethical position before and raised issues about some of the material that was acquired during her curatorship.

Various news sites are reporting that a red sandstone Roman altar from Maryport in Cumbria has been stolen from the Senhouse Roman Museum. It was found in 1880.

I have been reflecting on some of the objects returned to Italy in May 2015. One of the objects in the press photograph was a Peucetian clay stamnos that I had noted before, The Italian press release described it as follows:

The identification had been made by Glasgow University researcher Dr Christos Tsirogiannis when it surfaced at Christie's New York in December 2011 (lot 154). As I noted at the time, the stamnos surfaced through Sotheby's New York in 1995.

It would be interesting to learn who consigned the piece to Sotheby's. Are there related pieces from the same source?

Note that it has taken 20 years for the partial collecting history to emerge. Will that be the same for material coming out of the present conflicts in the Middle East?

The scale of the returns to Italy

I have been reflecting on the scale of the returns to Italy from North American collections. More than 280 items have been returned from major museums (though that does include a series of architectural terracottas from Princeton), just over 50 pieces from private collectors, and another 15 from dealers and auction-houses.

And then there are the other pieces that have been identified from the photographic archives but have not yet been returned.

We should not forget the items that have been returned to Greece and to Turkey.

There were a number of profitable contributions, perhaps my favourite being the essay by Dr Sam Hardy on 'Threats to cultural heritage in the Cyprus conflict'.


This essay resonates with the early 2015 debates about the looting of archaeological sites in Syria and northern Iraq during the present conflict with IS.

A second important contribution was:


In Contemporary perspectives, Duncan Chappell and Damien Huffer bring a helpful perspective on the looting of archaeological sites in Southeast Asia and the appearance of material on the Australian market. They comment on material acquired by major Australian museums from the art dealer Subhash Kapoor; some of the items have now been returned to India

Some of the papers written from a legal perspective were disappointing and, in my opinion, rather failed to engage with the reality of the issues.

Some of the comments I make in the review relating to the situation in the UK are now dated given the changes announced for the Portable Antiquities Scheme.

At the end of the article I ask two key questions:


Is the academic discourse of ‘heritage crime’ failing to address such significant archaeological concerns? Is the continuing and unsustainable destruction of the archaeological record to supply the insatiable demands of the market having serious intellectual consequences for our discipline?

Can I suggest that readers of LM have a look at the books in a library before spending £135?