New Surfacings and Re-surfacings in Germany

Cambridge based archaeologist Dr Christos Tsirogannis has made a number of new identifications for items that are due to be auctioned by Gorny & Mosch in Munich on 14 December 2016.

Below is a text based on Tsirogiannis' notes and reproduced with his permission.

1. An Etruscan bronze figure of a youth (lot 19)
Mid 5th century B.C.
Collecting history: 'Ex Sammlung R.G., Deutschland. Bei Royal Athena Galleries, New York, Catalogue XXI, 2010, 43. Ex Sotheby´s Catalogue of Antiquities 13. Juli 1981, 341'.
Tsirogiannis had previously identified the same figure from the Symes archive when it was on offer in the Royal Athena Galleries on October 2010. It was one of several pieces identified from the Medici and the Becchina archives. In January 2011 these identifications were presented in brief through 'Looting Matters' and by the Italian journalist Fabio Isman in Il Giornale dell'Arte (see here). It is unclear why this piece has resurfaced given the earlier discussion.

2. An Apulian red-figure situla attributed to the Lycurgus painter. (Lot 87)
360 - 350 B.C.
collecting history: 'Provenienz: Aus der James Stirt Collection, Vevey in der Schweiz, erworben 1997 bei Heidi Vollmöller, Zürich'.
This situla is shown covered with soil and salt encrustations from an image in the Becchina archive.
A handwritten note indicates that the images were sent from Raffaele Montichelli to Becchina on 18 March 1988. this predates the collecting history presented by Gorny & Mosch.

4. A Gnathian squat alabastron with the bust of a winged woman with sakkos, attributed to the White Sakkos Painter (Lot 127)
Apulia, 320 - 310 B.C.
Collecting history: 'Ex Christie´s London, 15.04.2015, ex 113; aus der Privatsammlung von Hans Humbel, Schweiz, erworben bei der Galerie Arete, Zürich in den frühen 1990er Jahren'.
This alabastron is also depicted in the Becchina archive in an image dating 24 September 1988, sent to Becchina again by Raffaele Montichelli. Again the date on the image is pre-dates the collecting history given by Gorny & Mosch.
However, the most significant element of this case is that it is the first example of an object reappearing after it was withdrawn following one of Tsiirgiannis' identifications.This alabastron was one of the two vases comprising lot 113, in Christie's 15/4/2015 antiquities auction in London. At that point the alabastron was among four identifications Tsirogiannis made and all four antiquities were withdrawn before the auction. All four cases and the image of the alabastron were published on the ARCA blog. It seems that the owner of the alabastron is trying to sell the vase in the antiquities market of a different country, thinking that Tsirogiannis would not notice the piece.

Tsirogiannis reports that Interpol as well as German and Italian authorities have been informed.

Collecting histories and the Chesterman collection 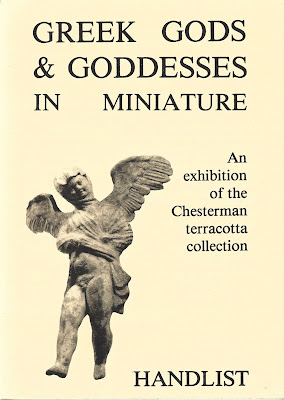 Now that Bonhams has withdrawn an Etruscan antefix from its auction due to what appear to be links with the Medici Dossier it is important that the collecting histories of the Chesterman collection of terracottas are explored and investigated.

Are any of the sources for these terracottas ones that are already known from the hundreds of objects already returned to Greece and Italy?

Bonhams has withdrawn the Etruscan antefix from its sale of antiquities after images of what appeared to be the piece were identified by Dr Christos Tsirogiannis in the Medici Dossier.

The staff of Bonhams now need to reflect on their due diligence process and perhaps the auction house's use of "stolen" art databases. It has been pointed out at the APPG in Westminster that there are clear issues about the over reliance of such databases for identifying recently surfaced archaeological objects.

The decision to withdraw the lot will presumably imply a detailed analysis of the Chesterman collection and the origins of each of the terracottas.

The Medici Dossier and the James Chesterman collection

Dr Christos Tsirogiannis has made another identification from the Medici Dossier. The piece in question is a 6th century BC Etruscan terracotta antefix that is due to be auctioned in London later this month (Bonhams 30 November 2016, lot 14). The collecting history ("provenance") is given as:
The antefix appears in two images, one as a standard Polaroid, the other as a record card for the Hydra Gallery. Hydra Galerie has been associated with Medici and has been discussed before, for example:

It is not clear why Bonham's has not mentioned Hydra Galerie in the collecting history. But note that on the card there is the annotation that the piece was to be assigned "v[ia] Londr[a]" with a value of $1,500.

The association with James Chesterman clearly has implications. I have listed some of his terracottas (and the associated bibliography) in:
I note that among the three examples I described was one that was acquired from N. Koutoulakis.

This new identification yet again raises issues about the due diligence process conducted by and on behalf of the auction houses. Staff at Bonhams are, I am sure, aware that the Cultural Property (Armed Conflicts) Bill is passing through the UK Parliament at the moment and that it is in the interest of those involved with the sale of archaeological material to be seen to be taking action when concerns are raised about objects that surface on the market.

I understand that the relevant authorities in Italy and the UK have been informed.

For further discussion of the antefix see ARCA.

The latest number of the International Journal of Cultural Property (IJCP) 23.3 (August 2016) has a cluster of papers that will be of interest. The starting point is Elizabeth Marlowe's, "What We Talk About When We Talk About Provenance: A Response to Chippindale and Gill" [DOI], pp. 217-236.


In an influential article published in 2000, David Gill and Christopher Chippindale devised a scale to assess the quality of the provenance information provided for the antiquities displayed in seven recent high-profile exhibitions or collections. This article critically reviews Chippindale and Gill’s provenance scale, arguing that the values it encodes legitimize some of the more intellectually harmful practices of dealers and curators. The scale also fails to differentiate between more intellectually responsible methods of hypothesizing provenance and those that merely generate houses of cards. An alternative model for assessing how antiquities are discussed in museum scholarship, focusing on epistemological precision and reflexivity, is offered.

This is followed by:


Essentially Marlowe concludes that the situation is even more bleak that the one that we had described.

My hope is that those discussing cultural property will stop using the obsolete word "provenance".

The Hansard text of the second reading of the Cultural Property (Armed Conflicts) Bill on Monday 31 October 2016 has now been made available.

Some highlights in the debate (that ranged over a number of cultural issues beyond the Bill) include: