Lucius Verus said to be from Bubon

I am reviewing some long-standing claims of cultural property. Among them is the head from a bronze portrait of Lucius Verus. This is said to be from the Sebasteion at Bubon in Turkey.

It surfaced on the London market in the summer of 1970 after being restored by Peter Smith and Anna Plowden (Bernard Weinraub, "Squashed Bust of an Emperor Restored by 2 Young Britons", New York Times 7 June 1970). A representative of Spink & Son suggested that the head had been "excavated in Eastern Europe, probably Hungary, after World War II".

Yet by 1981 Jiri Frel could claim that the head was "said to be from Bubon" (Roman Portraits, no. 62; inv. 73.AB.100). This reflected the research of Jale Inan and Cornelius C. Vermeule. Carol Mattusch in 1996 noted, "Reported to be from Ibecik (ancient Bubon in Lycia), Turkey."

The head was acquired by the J. Paul Getty Museum subsequent to the 1970 UNESCO Convention. Will the museum be returning the head to Turkey along with associated pieces?

Ian Richardson has commented on his favourite Treasure Finds (Laurence Cawley, "Treasure finds in England top 1,000 for first time", BBC News 23 November 2017). This coincides with the number of Treasure Finds passing the 1,000 mark for the third year in a row. (See statistical summary here.)

Norfolk and Suffolk top the list with 211 finds. Julie Shoemark, the finds liaison officer for Norfolk, commented that "the rising number of reported treasure finds corresponded to a growth in the numbers of metal detecting clubs."

There is no comment from Richardson on the scale of the lost or damaged archaeological contexts represented by the 1,120 Treasure Finds.

An Attic red-figured cup known from the Medici Dossier has surfaced at an auction of Gorny & Mosch in Munich (Auction 252, December 13, 2017, lot 66). This identification has been made by Cambridge-based academic, Dr Christos Tsirogiannis. The attribution is to the Hegesiboulos painter.

The cup first surfaced at Sotheby's in London on 13-14 December 1982, lot 248 (BAPD 7047). Two items also from this sale, an Attic red-figured amphora attributed to the Berlin painter and a Lucanian nestoris, have already been returned to Italy from two separate North American museum collections (see here). The catalogue entry notes that the cup is being sold with a copy of the Sotheby's catalogue entry.

The cup then passed into the 'P.C.' collection in southern Germany (a detail apparently unknown to the Beazley Archive).

The same auction-house has been trying to sell other material identified from the range of photographic archives (also identified by Tsirogiannis): a Gnathian askos, an Etruscan bronze athlete, an Apulian situla and an Apulian krater.

The auction-house was also named in the investigation known as Operation Ghelas.

These five examples suggest that Gorny & Mosch need to improve the rigour of their due diligence search prior to sales.

Gorny & Mosch will, we are sure, be wanting to be seen to co-operate with the Italian authorities.

The returns from the J. Paul Getty Museum have included Apulian pots that were given by Gordon McLendon in 1977 (Inv. 77.AE.14–15).

Note that these Apulian pieces moved almost directly from Bürki to the museum via McLendon. 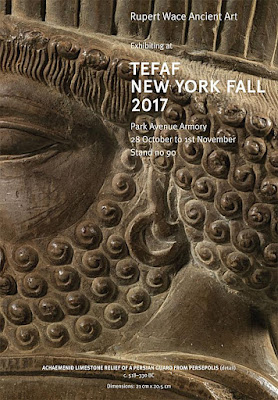 A fragment from one of the Persepolis reliefs has been seized at TEFAF in New York (James C. McKinley Jr, "Ancient Limestone Relief Is Seized at European Art Fair", New York Times October 29 2017).

The relief was recorded at Persepolis as late as 1936 (see here). It was acquired by the Montreal Museum of Fine Art in the 1950s from Frederick Cleveland Morgan. (It is not clear how it moved from Persepolis to Montreal.) The relief was stolen from the museum in September 2011, and recovered in Edmonton in January 2014. The insurers apparently sold the relief to Rupert Wace Ancient Art from whose stand at TEFAF the piece was seized.

It is not clear why the relief was not spotted from the archive photographs when it formed part of the collection in Montreal. It can only be assumed that the dealer assumed that there was no problem with the history of the relief fragment.

The relief was clearly removed after the 1930 legislation (see here) that would have made its export illegal.