Steinhardt and the Berlin painter oinochoe 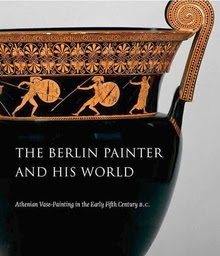 Among the pots in the exhibition, The Berlin painter and his world, was an oinochoe (shape 1) from the Judy and Michael Steinhardt collection in New York (BN44; not in BPAD). The description is given:


Youth in himation leaning on stick to right, dropping red tidbit to a Maltese dog standing on its hind legs.

The oinochoe was attributed to the Berlin painter by Robert Guy.

Dr Christos Tsirogiannis reminds me that this is indeed the oinochoe seized in January 2018 [see LM]. Tsirogiannis has now published on the Steinhardt seizure:


It appears as no. 3 in the list of objects, and Tsirogiannis notes that it was purchased in 1996 for $215,000. Tsirogiannis identified the oinochoe in two images from the seized Medici dossier.

This now raises a number of questions:


It should be remembered that this oinochoe is not the only pot attributed to the Berlin painter that passed through the hands of Medici.