Aydin Dikmen and the forging of antiquities

Suzan Mazur has published a timely piece on Aydin Dikmen ("Anatolian Stargazer Fakes?—The Aydin Dikmen Connection", Huffington Post September 22, 2017). She raises the spectre that some of the more complete Anatolian "Stargazer" figures could be modern creations.

Mazur notes the presence of such figures in the hands of Aydin Dikmen who was separately reported as having made the "best fakes" (though not specifically of Anatolian figures). Dikmen's basement in Konya was also reported to have been equipped to make objects from marble.

There are clear intellectual consequences if the insecure "Stargazers" are allowed to join the corpus of Anatolian figures that have been recovered from scientific excavations.

Owners of "Stargazers" that surfaced on the market since 1960 need to check their full histories.

It needs to be stressed that some of these "Stargazers" could indeed be ancient, but the absence of contextual information will make it difficult for their date to be authenticated.

The Guennol Stargazer and its findspot 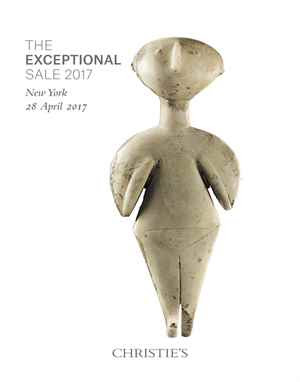 There has been much attention paid to Turkey's claim on the Guennol Stargazer. It needs to be remembered that Pat Getz-Gentle (Getz-Preziosi) appeared to confirm that the figure was found in central Anatolia, i.e. Turkey.

Incidentally, the Guennol Stargazer is reported to have been found with the Stargazer in the Shelby White collection as well as other figures in several other North American private collections.

The authority for Getz-Gentle's statement is unclear. How did she know that the six figures were found together? Did they pass through common hands? 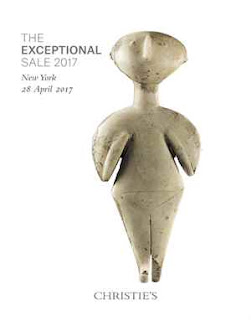 G. Max Bernheimer described the piece: "The Guennol Stargazer is an iconic work of art and one universally recognised as the finest Kiliya idol in existence".

The collecting history is:

The Horse in Ancient Greek Art

The exhibition, 'The Horse in Ancient Greek Art', will be on show at the National Sporting Library and Museum, and the Virginia Museum of Fine Arts. It will include a number of objects from private collections. I hope that the full collecting histories will be provided.

I looked up the Attic red-figured column-krater attributed to the Orestes painter (and featured on the exhibition website). It surfaced in the Fortuna gallery in Zurich in 1980 (and was re-offered in 1983), and then was for sale in the Royal-Athena Galleries, New York in 1983. It was then offered through the Old World Galleries, New York before being auctioned at Christies (June 8, 2004, lot 328) where it was sold for $47,800. It then passed into a Virginia private collection. What was the collecting history of this krater prior to 1980?

I note that other kraters attributed to this painter were found at Agrigento, Camarina (two), Chiusi and Spina. Where was the Virginia krater found? And when? Its fairly complete nature suggests a tomb is quite likely.

This exhibition reminds us of the material in the Virginia MFA that has been identified by Cambridge-based Dr Christos Tsirogiannis.