I could not help noticing that ancient monuments in Scotland not in State Guardianship have prominent reminders about their protection.

A fragmentary relief of Mithras was discovered in 1964 at Tor Cervara on the outskirts of Rome. It was acquired by the Museo Nazionale Romano.

A further fragment of the relief was acquired by the Badisches Landesmueum in Kalrsruhe in 1976. The source was an unstated Swiss dealer. This fragment has been reunited with the rest of the relief [press release].

Today a further fragment of the relief was reunited with the other pieces. This had been recovered during a raid in Sardinia. 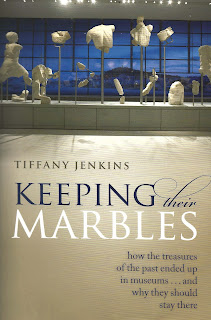 I have noted earlier reviews of Jenkins' Keeping their marbles here. Guy D. Middleton (Newcastle University) has reviewed the book for AJA:


"If anything, Jenkins’ book convinces me that the issue of claims for the return of objects is something best approached on a case-by-case basis, that museums do have a role in soft diplomacy with communities that suffered due to past imperialism and that the efforts at building better relationships between museums and other groups are worthy."

The Perge Weary Herakles in Context

Boston's Museum of Fine Art returned the upper part of the Weary Herakles to Turkey. Indeed it appeared in the Glories of the Past exhibition.

The full collecting history can be found here.

A further seven pieces of the Sevso Treasure have been acquired by Hungary ("Hungary Buys 2nd Half of Roman-Era Silver Treasure", AP 12 July 2017). It is reported that 28 million euros were paid for the remaining pieces, making 43 million euros for the hoard.

This contextless hoard has been stripped of valuable information. We do not know for certain where it was found. And it is unlikely that the original finder will have received a significant sum of money.

Who are the beneficiaries of these sales?

The seizure of thousands of antiquities including cuneiform tablets from Hobby Lobby in the US raises several issues.

First, the collector seems to have been unaware of the ethical issues surrounding the acquisition of objects without documented collecting histories. There have been numerous cases in recent years of private collectors returning material to countries such as Greece, Turkey, and Italy. The collector has ignored the UNESCO Convention, the AIA Declaration, and examples from history.

Second, the collector seems to have been guided by a consultant who was seeking to form the collection. How much responsibility was given to those who appear to have been overlooking the ethical issues?

Third, it appears that the material was in effect laundered by importing from countries where there were no legal concerns. Information on the networks that were used could be declared in order to prevent future issues.

Fourth, inaccurate and misleading information appears to have been used in the paperwork used for imports.

Fifth, concerns raised by academics about the way that the collection was formed were at best overlooked and at worst rejected.

Sixth, academics associated with the project should have been voicing their concerns in a more public way.