Italian journalist Fabio Isman has written in today's edition of Il Messaggero (May 31, 2011) about a new sighting from the Medici Dossier. He reports that Cambridge University researcher Christos Tsirogiannis has identified the pair of Canosan kraters in Christie's Rockefeller Plaza sale on June 8, 2012 (lot 99) from polaroids. The kraters were reported to have been in a private collection in New York, and were sold at Sotheby's New York in 1986 (30 May 1986, lot 24).

Who consigned the kraters to Sotheby's in 1986? What other material originating from Medici was passing through the New York market in that period?

I presume that the recent return of similarly sourced material to Italy has set an appropriate precedent for Christie's.

Jason Felch and Ralph Frammolino have listed some of the items that Turkey would like to see returned from the J. Paul Getty Museum.

Three of the pieces on their list have been identified as being associated (by Vermeule, and more recently Kozloff) with Bubon in Turkey. (I also add the information supplied by Felch and Frammolino.)

Felch and Frammolino note a fourth:
d. 72.AB.103. Bronze foot. "Acquired from Nicolas Koutoulakis." Fire of Hephaistos no. 19: "Reported to be from Ibecik (ancient Bubon in Lycia), Turkey".

I have been reviewing the literature for the Roman bronzes linked to Bubon (in modern Turkey). In particular, I have looked at Kozloff's discussion of the Roman bronze acquired by the Cleveland Museum of Art. Kozloff seems to suggest that the bronzes were found at Bubon, although they were perhaps originally displayed elsewhere.


We might then envision these bronzes gracing an imperial cult temple in a city larger than Bubon-perhaps a major city-that was attacked by one or another group in the mid-third century. Purposefully destroyed by the invaders, the sculptures were rescued by the inhabitants, taken in broken bits to Bubon, and stored away.

It seems that Kozloff did not doubt the find-spot, and even places their removal from the site around 1966 (when Bean noted looting at the site).

It is clear that the museum was acquiring recently surfaced antiquities in the 1980s (which is why it returned items to Italy). Will the museum contact the Turkish authorities to assist with their attempt to reunite the bronze statues from the sebasteion at Bubon?

My essay on the material and intellectual consequences of the Metropolitan Museum of Art's acquisition of the Sarpedon krater has appeared in a new volume. The research develops the themes explored in earlier published work on Cycladic figures and mapped onto Athenian figure-decorated pottery.

I cover the following themes:


There are nine essays in the volume.

Gill, D. W. J. 2012. "The material and intellectual consequences of acquiring the Sarpedon krater." In All the King's Horses: essays on the impact of looting and the illicit antiquities trade on our knowledge of the past, edited by P. K. Lazrus and A. W. Barker: 25-42. Washington DC: Society for American Archaeology.  [SAA website]

Dalya Alberge has written some important pieces about the antiquities market. These include coverage of objects identified from photographic archives at Christies in 2010 and Bonhams in the same year.

There is due to be significant newspaper coverage of the continuing problem of antiquities surfacing on the New York market. Given that a spokesperson for Christie's described objects identified in such photographs as "stolen" (and those objects were returned to Italy in April 2012), we should expect full co-operation with the Italian authorities.

Thoughts on a pair of Apulian kraters

Conversations over the last few months have made me reflect on a pair of Apulian kraters that have been on offer on the New York market (and now sold).

The pair show Amphiaros before an enthroned Pluto, and Aphrodite and Zeus flanking Adonis. They are nearly equal in height: 1.14 m and 1.12 m.

It is significant that images of both kraters appear in the photographic archive seized by Greek authorities on the island of Schinoussa. A North American dealer has informed me that the London-based dealer represented by that photographic archive supplied much of the material for Athena Fund II.

This raises a further issue. Who handled the material prior to the London-based dealer? Will another photographic archive shed light on the answer?

I am grateful to Cambridge University researcher Christos Tsirogiannis for his identifications of these two kraters.

SLAM needs to adopt an ethical approach to the mummy mask

Rick St Hilaire has noted that attorneys for the St Louis Art Museum (SLAM) have rejected the request for the case relating to the mummy mask to be reopened.


It may have escaped the notice of the SLAM attorneys that the collecting history ("provenance") provided by the Swiss-based dealer is flawed. The curatorial team at SLAM now need to work with the Egyptian authorities to resolve the case.

How does SLAM explain the discrepancy?


SLAM needs to demonstrate that it has adopted the highest ethical and professional standards when it comes to the acquisition of archaeological material.

There is a report on the increased levels of looting in Egypt: "In Egypt Turmoil, Thieves Hunt Pharaonic Treasures", New York Times May 12, 2012.

Illegal digs near ancient temples and in isolated desert sites have swelled a staggering 100-fold over the past 16 months since a popular uprising toppled Hosni Mubarak's 29-year regime and security fell apart in many areas as police simply stopped doing their jobs. The pillaging comes on top of a wave of break-ins last year at archaeological storehouses — and even at Cairo's famed Egyptian Museum, the country's biggest repository of pharaonic artifacts.

Auction houses and galleries will need to step up their due diligence procedures.

Email ThisBlogThis!Share to TwitterShare to FacebookShare to Pinterest
Labels: due diligence, Egypt 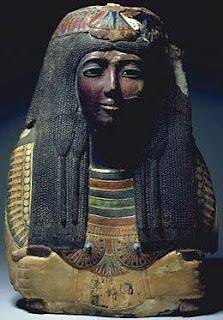 Rick St Hilaire has reported that the US Attorney for Eastern District of Missouri has asked for the case relating to the Egyptian mummy mask in the St Louis Art Museum to be reopened.

This is a sensible move as it is now clear that the collecting history ("provenance") supplied by the dealer does not appear to be accurate or even trustworthy.

One has to ask why anybody would wish to fabricate a collecting history?

If the case does reopen it will cause problems for those auction houses and dealers who have already started to cite the SLAM case. And there are implications for those museums that have acquired material with equally interesting collecting histories from the same Swiss source.

In 1980 Cornelius C. Vermeule put together a list of Roman imperial statues that could be linked to the sebasteion in Bubon, Turkey. Subsequent to this in 1993 J. Inan published a list of some of the present locations, and this was discussed by C. Chippindale and D. Gill in 2000.

Chasing Aphrodite has now reported that the bronze headless statue of Marcus Aurelius in the Cleveland Museum of Art  (inv. 1986.5) is on the list of objects that Turkey has requested for return. (The association with Bubon is clearly stated on the Cleveland website.)

Cleveland is apparently unwilling to discuss the matter ("The Cleveland Museum of Art declined to answer questions about Turkey’s claim"). Yet the AAMD guidelines state quite clearly, "AAMD is committed to the exercise of due diligence in the acquisition process, in particular in the research of proposed acquisitions, transparency in the policy applicable toacquisitions generally, and full and prompt disclosure following acquisition" [emphasis mine].

The year of acquisition, 1986, coincides with 5 pieces that Cleveland has now returned to Italy. 1986 is a date when due diligence does not appear to have been of paramount importance to the curatorial team in Cleveland. It is important that Cleveland reveals how it acquired the statue in order to show its commitment to the highest ethical standards. 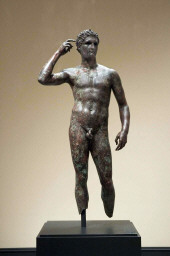 It has been reported in the Italian press that a court in Pesaro has confirmed the confiscation of the "Fano Athlete" currently residing in the J. Paul Getty Museum (ANSA May 4, 2012). The Italian prosecutor is quoted: "Vedo pochi spazi di manovra per il Getty, se non un ricorso per motivi dilatori".

Delaying tactics may, indeed, be the order of the day. It is clear that the process of removing the statue from Italian territory was far from straightforward. The Getty should act in a positive and conciliatory way and open negotiations with the Italian authorities.

It should be remembered that the Becchina revelations are likely to identify further material removed from Italy.

New York's Metropolitan Museum of Art appears to remain silent over the return of (some of the) fragments from the Dietrich von Bothmer collection to Italy.

How did a senior member of its curatorial staff acquire this material? Why has the Met failed to make a statement?

The UCS Academy hosted a 'Conversation' last night. BBC journalist Mark Murphy explored some of the issues relating to the looting of cultural property. We were able to discuss how looting is not just confined to the Mediterranean and other parts of the world, but even to East Anglia. We noted the notorious looting of the Roman bronzes from Icklingham, and expressed the strong hope that the present proprietor of some of them, Shelby White, would return them to Suffolk where they belong. Suffolk farmer John Browning was present in the audience.

We commented on the issues of metal-detecting. I had observed a series of 'searchers', supported by several minibuses, around a major Roman scheduled monument in Essex earlier this spring. I raised the issue that finds from such 'searches' appear to be under-reported.

We also discussed the Medieval cross from St Edmunsbury that now resides in New York.

There were some excellent questions from the audience. One person asked specifically about the theft of Chinese objects from two UK university collections (one in a neighbouring county).