Later this week I will be exploring the collecting history of an Attic black-glossed bolsal that formed part of the Nostell Priory collection inYorkshire. It probably formed part of an early 19th century collection in Italy. A study of the piece, with a companion in the British Museum, has reminded me of the importance of archaeological context. Where the was bolsal found? What were the associated objects? I doubt we shall ever know. It is possible to say something about the piece thanks to excavated examples from Athens.

Lee Rizzuto and the Getty

Among the objects to be appearing in the forthcoming exhibition exploring ancient Sicily at the J. Paul Getty Museum and the Cleveland Museum of Art is a terracotta given by Lee Rizzuto in 1979 (no. 119; inv. 79.AD.37).

What are the full collecting histories of these pieces? How were they acquired by Rizzuto?

The image chosen to publicise the upcoming exhibition, "Sicily: Art and Invention Between Greece and Rome", at the Cleveland Museum of Art from September 2013 is a Sicilian terracotta head given to the J. Paul Getty Museum in 1976. The Getty has issued a checklist of the exhibits that includes items returned from North American collections to Italy.

Both the Cleveland Museum of Art and the J. Paul Getty Museum have had to return objects to Italy. Both museums will want to avoid any further controversial decisions.

So when did Gerchik acquire this "Head of a Goddess"? Did he acquire it on the Beverly Hills market? For how long did it reside in his collection? Was the head from an "old Swiss collection"? What is the full collecting history of this piece? 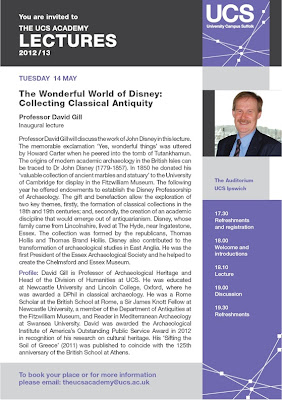 Readers of LM are very welcome to attend this lecture. I will be looking at the background to Dr John Disney and will explore how he became interested in archaeology. The lecture will develop my memoir on Disney for the Oxford Dictionary of National Biography.

The ex-Steinhardt phiale from Sicily

Earlier this week I noted the forthcoming exhibition of antiquities from Sicily that will open at the J. Paul Getty Museum this summer. Part of the Morgantina silver hoard will be on display (after its return from New York's Metropolitan Museum of Art). I am grateful to Fabio Isman for drawing my eye to another important piece in the exhibition: the gold phiale apparently found near Caltavuturo (no. 89).

The story of the phiale is well documented (and see images). It was seized from Michael Steinhardt and returned to Italy.

The UCS Heritage seminar welcomed Paul Barford to give a paper today. It was a good opportunity for me, and for those attending, to hear Paul articulate his views on the unrestricted hunt for portable archaeological objects. There appeared to be a mix of attendees from the archaeological service, the Portable Antiquities Scheme, museums, and the metal-detecting community.

My colleague Dr Ian Baxter and I were tweeting some of the key points. Here are some of them:


There was an extended time of questions, discussion and debate.
These points should give a flavour of the paper as well as the subsequent discussion. They do not necessarily cover all of Paul's points or all of the questions.

I felt that the seminar brought together a range of positions in the debate. Paul offered a voice that is so often marginalised, overlooked or silenced. I very much hope that he will turn his notes into a published version.

It was good to discuss Paul Barford's forthcoming UCS Heritage Seminar with him yesterday. [All welcome at the seminar tomorrow, but please book in the normal way.] One of the topics is going to be the unsustainable damage to largely unrecorded archaeological sites. What knowledge is being lost?

One of the more unexpected lines of thought was the way that finds of recently surfaced portable antiquities are merely showing up as a scatter on maps. How far is this a useful way to think about context?

We also reflected on "public archaeology" and the media. How far do programmes that present archaeology as a hunt for "Secret Treasures" do our discipline harm?

There will be time for discussion, questions and answers at the end of Paul's presentation. It would be good to see readers of LM present in the audience.

Sicily at the Getty

The Getty has issued a list of the objects due to appear in its exhibition on Sicily: Art and Invention between Greece and Rome. [details]

The pieces from the Getty are (with some additional information supplied by me):

92. Head of Hades. From Morgantina. 85.AD.105. Formerly Robin Symes; Maurice Temepelsman. The head will be returning to Italy.

The exhibition appears to be including the Morgantina silver hoard now in Aidone.

The FBI have issued a press release about the indictment of a North American coin dealer on tax charges ("Coin Dealer Formerly from Hackensack Indicted on Federal Tax Charges", April 2, 2013).


[Gantcho] Zagorski owned and operated a business that sold ancient coins to domestic and international customers, primarily on eBay, from his residence in Hackensack. Zagorski, along with his wife and, at times, his daughter, operated the coin-selling business under the names Diana Coins, Paganecoins, and Diana Coins LLC. For calendar years 2006, 2007, and 2008, Zagorski provided his tax preparer with false and fraudulent information by understating the amount of gross receipts and sales earned by his business. Zagorski then caused to be filed with the IRS those federal income tax returns for 2006, 2007, and 2008 containing that false and fraudulent information.

It will be interesting to see what else emerges from this case.

The Portable Antiquities of East Anglia 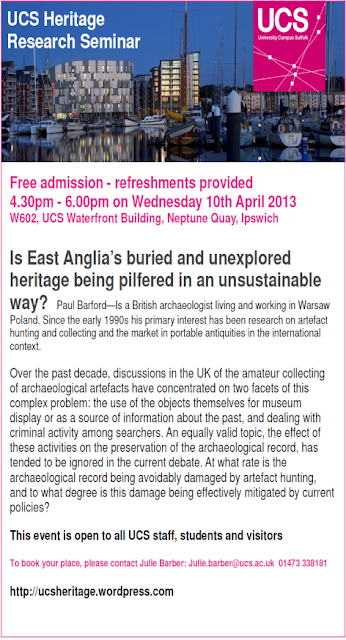 Paul Barford will be leading a session for the UCS Heritage Seminar in April. Members of the seminar can look forward to a lively debate.

All welcome but attendees should contact Julie Barber (details on poster).