I would like to wish all Readers of LM a very Happy New Year!

At the beginning of 2013 I made a number of predictions. I drew attention to Cambodian antiquities and we have seen items returned. Sotheby's has also agreed to return a piece that had been due to be auctioned.

I also thought that more material would be identified from the Medici archive. This has been the case for items surfacing on the market (e.g. Gnathian krater, the Ackerman Apollo, an East Greek warrior, the Symes torso, the Symes Pan, the Medici Pan, and other items) as well as in established collections such as the Virginia Museum of Fine Arts (and here).

The J. Paul Getty Museum agreed to return the terracotta head of Hades. The Italian enquiry into a curator at the Princeton University Art Museum came to an end. However there has been no movement on the Villanovan bronze hut. We continue to await the return of material to Greece from the Michael C. Carlos Museum at Emory University.

New York's Metropolitan Museum of Art has continued to place a veil over the formation of the Bothmer collection of pot fragments. However one partial cup will be returning to Rome after Dr Christos Tsirogiannis made the link with a fragment in the Villa Giulia.

Cornell will be returning cuneiform tablets to Iraq.

And we have not forgotten about the mummy mask in the St Louis Art Museum.

Italian authorities netted Etruscan antiquities in Operation Ifegenia. A fragment from a tomb at Paestum has been intercepted in North America.

The AAMD does not seem to have resolved some issues with items appear on the Object Register.

Turkey has yet to press hard for the return of material such as the Bubon bronzes. However Michael Bennett of the Cleveland Museum of Art has decided to add his voice to the debate. There has also been some discussion of a sarcophagus spotted in Geneva.

Little further work has been done on European (including UK) museums and their acquisition of material from Robin Symes, Giacomo Medici and Gianfranco Becchina. This is perhaps a task for 2014. We did however draw attention to the situation in Copenhagen.

In the UK Simon Thurley (and see his Men from the Ministry) took up the case of Heritage Crime. I have also added my voice for the return of the Icklingham Bronzes. This was a theme taken up during an outdoor seminar during the excavations at Leiston Abbey in Suffolk. There have been some significant instances such as the paintings from a church in Devon.

On different fronts I revisited my thinking on the Universal Museum. The Cleveland Museum of Art has published its position on the Apollo and I have responded in an academic article. A small publication on the Crosby Garrett helmet appeared (and has done little to answer concerns about how it was removed from the ground). British Prime Minister David Cameron has expressed his views on the Parthenon marbles. I was able to hear Paul Barford present a seminar on portable antiquities during his visit to East Anglia. I have returned to my analysis of the value of the antiquities market. I also delivered my inaugural lecture on one of the founders of modern archaeology. 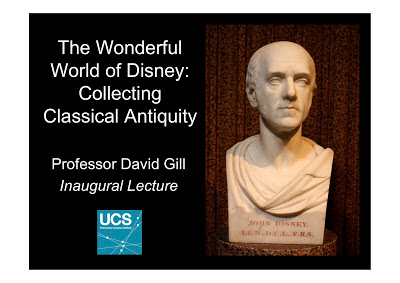 I would like to wish all readers of Looting Matters a very happy Christmas.

My attention was drawn to this 'seasonal offering'. Classicists will enjoy some of the antiquities (including a Cycladic figure) contributing to the message.

This means that over half a billion dollars worth of antiquities have been sold at the two auction-houses in NYC since 1999, with Sotheby's well ahead of Christie's by some $142 million.

Fabio Isman has a piece on the Medici and Symes pieces surfacing on the New York market ("Pezzi di Medici e Symes all’asta: fino a quando?", Artemagazine December 2013). This draws on the identifications made by Dr Christos Tsirogiannis. It also has the images of one of the objects in the Swiss Gallery.

The piece is a reminder that auction-houses need to undertake a more rigorous due diligence process to prevent these toxic antiquities from appearing at the sales.

Sale of Egyptian Antiquities at Sotheby's

I had noted that Cambridge University researcher, Dr Christos Tsirogiannis, had spotted that a Pan on offer at Christie's today appeared in the Schinousa archive. The lot has been withdrawn.

Sotheby's to return statue to Cambodia

Over a year ago LM discussed the Khmer statue that was being offered by Sotheby's. It appears that the collecting history for the piece was not as straightforward as it first seemed. My view was Sotheby's would wish to distance the auction-house from any notion of wrong-doing given the damaging impact of the Medici Conspiracy. It has now been announced that Sotheby's will be returning the disputed statue to Cambodia (Tom Mashbery and Ralph Blumenthal, "Disputed Statue to Be Returned to Cambodia", New York Times December 12, 2013).


The accord ends a long bare-knuckled court battle over the Khmer treasure, a 10th-century statue valued at more than $2 million. The Belgian woman who had consigned it for sale in 2011 will receive no compensation for the statue from Cambodia, and Sotheby’s has expressed a willingness to pick up the cost of shipping the 500-pound sandstone antiquity to that country within the next 90 days.

At the same time, lawyers from the United States Attorney’s Office in Manhattan who had been pursuing the statue on Cambodia’s behalf agreed to withdraw allegations that the auction house and the consignor knew of the statue’s disputed provenance before importing it for sale.

The accord said the consignor, Decia Ruspoli di Poggio Suasa, who had long owned the statue, and Sotheby’s had “voluntarily determined, in the interests of promoting cooperation and collaboration with respect to cultural heritage,” that it should be returned.

This seems to confirm my hunch that Sotheby's would want to be seen to be a positive contributor to the debate about international cultural property.

The NYT statement includes a very significant pronouncement that will cause consternation among those selling selling cultural property in North America:


In a statement, the United States attorney in Manhattan, Preet Bharara, said, “Today’s settlement reunites a priceless artifact with its rightful owners, the people of Cambodia.”

“The United States is not a market for antiquities stolen from other nations,” he added, “and we will continue to track down and return any that are brought here illegally.”

The news comes on the back of the decision back in May 2013 that New York's Metropolitan Museum of Art would be returning two other Khmer statues. It seems that Cambodia will now press for the return of a statue in the Norton Simon Museum in Pasadena, California.

I have been plotting the sale of antiquities on the New York market for some years. Today's sale at Sotheby's New York shows that the two June and December auctions this year netted over $20 million, of which $6.8 million was represented by Egyptian material (34%).

Since 1998 some $77 million worth of Egyptian antiquities have been sold by Sotheby's New York, representing 20% of the value of the sales. Just over 61% of the lots in this period appear to have surfaced since 1973, a downward trend suggesting that Sotheby's is more cautious of objects that do not have a documented collecting history that can be traced back.

Following the identification of a Pan in the Medici Dossier, Sotheby's New York withdrew the lot from the sale. Such responsible behaviour reflects the seriousness that the auction-house takes over the due diligence process.


So when was the Pan in the possession of Robin Symes? What is the identity of the private collection? Is the collecting history presented by Christie's robust? What authenticated documentation was supplied to Christie's?

The Edward H. Merrin Gallery has been linked to the bronze Zeus returned to Italy, material in the collection of Dr Elie Borowski, as well as the marble Castor and Pollux on loan to New York's Metropolitan Museum of Art.

I am sure that readers of LM will be interested in the document and no doubt will wish to respond to the DCMS.

The announcement comes with a further £5m [press release].

Sotheby's New York are due to auction a giallo antico marble bust of Pan next week (December 12, 2013, lot 51). The estimate is $10,000-$15,000. Dr Christos Tsirogiannis has pointed out to me that a polaroid image of the sculpture was found on the Geneva Freeport premises of Giacomo Medici. The image is stapled to a form for the Hydra Galerie, an outlet linked to Medici (and see also here).

What is the identity of the anonymous French collection? What does the association with Hydra Galerie imply?

I am grateful to my Cambridge colleague Dr Christos Tsirogiannis for pointing out that the head of Hermes-Thoth due to be auctioned at Sotheby's New York next week had once passed through the hands of Robin Symes (December 12, 2013, lot 39). The estimate is $2.5-3.5 million.

Sotheby's note the association with Symes and suggest that it had once been in the possession of Douglas H. Fisher in London during the 1950s and 1960s. The basis for this information is not indicated.

Colour images of the head feature in the Schinousa archive where they were identified by Tsirogiannis.

Medici and the Virginia Museum of Fine Arts

Cambridge University researcher, Dr Christos Tsirogiannis, has identified another ancient object from the Medici dossier. He has identified a Gnathian askos acquired by the Virginia Museum of Fine Arts in 1980 from images seized in the Geneva Freeport. The item was derived from Fritz Bürki whose name is associated with many of the returns from North American collections to Italy.

According to AAMD Guidelines the curatorial staff at VMFA will need to contact the Italian authorities.

Cleveland and the Apollo 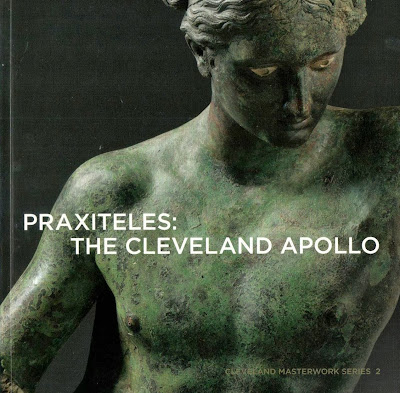 The latest number of the Journal of Art Crime has appeared. This contains my essay on the so-called Cleveland Apollo.


"The exhibition of the Cleveland Apollo and the thinking behind the publication of Bennett’s book reveal what Roger Bland of the British Museum once described (in a review of James Cuno’s work) as “an example of US cultural imperialism at its worst”. Bennett has reignited the debate and prepared the way for a full and balanced discussion of the so-called Cleveland Apollo at some future managed event at the Cleveland Museum of Art."