The scale of the returns to Italy

I have been busy working on an overview, "Returning Archaeological Objects to Italy". The scale of the returns to Italy from North American collections and galleries is staggering: in excess of 350 objects. This is clearly the tip of the iceberg when it comes to the material that has surfaced on the market without a history that can be traced back to the period before 1970.

I will provide more information in due course, but the researcher is a reminder that we need to take due diligence seriously when it comes to making acquisitions.

Email ThisBlogThis!Share to TwitterShare to FacebookShare to Pinterest
Labels: due diligence, Italy 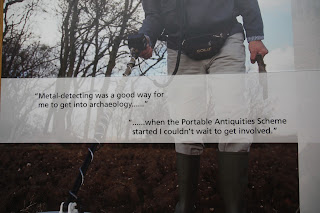 Policy decisions for protecting archaeological sites need to be informed by carefully argued positions based on data. Dr Sam Hardy has produced an important study, “Metal detecting for cultural objects until ‘there is nothing left’: The potential and limits of digital data, netnographic data and market data for analysis”. Arts 7, 3 (2018) [online]. This builds on Hardy's earlier research.

Readers should note Hardy's conclusion about his findings: "they corroborate the detecting community’s own perception that they are ‘beat[ing these sites] to death’".

Pieterjan Deckers, Andres Dobat, Natasha Ferguson, Stijn Heeren, Michael Lewis, and Suzie Thomas may wish to reflect on whether or not their own position is endangering the finite archaeological record.

Abstract
This methodological study assesses the potential for automatically generated data, netnographic data and market data on metal-detecting to advance cultural property criminology. The method comprises the analysis of open sources that have been identified through multilingual searches of Google Scholar, Google Web and Facebook. Results show significant differences between digital data and market data. These demonstrate the limits of restricted quantitative analysis of online forums and the limits of extrapolation of market data with “culture-bound” measures. Regarding the validity of potential quantitative methods, social networks as well as online forums are used differently in different territories. Restricted quantitative analysis, and its foundational assumption of a constant relationship between the size of the largest online forum and the size of the metal-detecting population, are unsound. It is necessary to conduct extensive quantitative analysis, then to make tentative “least worst” estimates. As demonstrated in the sample territories, extensive analyses may provide empirical data, which revise established estimates. In this sample, they corroborate the detecting community’s own perception that they are ‘beat[ing these sites] to death’.

The Beierwaltes are taking legal action after Swiss authorities seized objects during a raid on a warehouse in Switzerland (Amanda Pampuro, "Colorado Couple Seek to Reclaim Artifacts From Swiss", Court House News 8 August 2018).  The Beierwaltes had consigned their pieces for sale by Phoenix Ancient Art in Geneva.

The Beierwaltes are seeking $24 million in damages for the seizure of the 18 objects valued at $8 million.

It appears that the Beierwaltes were purchasing objects from Robin Symes. Do any of the 18 objects consigned to Geneva appear in the Schinousa archive? Will the Beierwaltes release the full histories of the objects?

The story mentions that the Beierwaltes


assert they vetted all of their items and “purchased each object in reliance on express or implied representations from reputable dealers and auction houses in the absence of any thefts reported to publicly available databases of stolen art, such as the Art Loss Register.”

This statement fails to note that objects removed from archaeological contexts would not necessarily be reported to the ALR or other similar registers.

See also the material from Eshmun.

In November 2006 four members of a shipping family were charged. It was reported at the time in the Greek press that '152 artifacts were found at the villa on Schinoussa and at the family's Athenian home in Psychico, northern Athens' ("Four charged over artifact stash", 23 November 2006).

The verdict on the Schinousa case was reached on Thursday 26 July 2018. A translation of the verdict has been circulated by the State lawyer: ‘The Court by majority found guilty Despina and Dimitri Papadimitriou for the act of misappropriation of monuments and convicted each one of them to suspended imprisonment of 4 years. It also ratified the seizure and ordered the confiscation of the seized items’.

The day after the verdict, 27 July 2018, Dr Christos Tsirogannis, who had served as an expert witness in the case, received a letter from the London law firm acting for their Greek clients.

Dr Sam Hardy has written extended comments on this latest development, and ARCA provides an overview of the case.