From Berlin to Cairo? 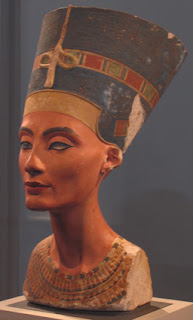 How far back should cultural property claims go? Should there be a limitation?

Last week in Berlin I came face to face with the famous portrait of Nefertiti. This was found in a scuptor's workshop at Amarna by Ludwig Borchardt in 1912. The head then formed part of the German allocation of the finds.

The official website of Zahi Hawass takes the position that the head was "smuggled out of Egypt in 1913". Things have been hotting up since the Altes Museum in Berlin refused to loan the portrait to Egypt for the projected opening of the Grand Egyptian Museum.

Hawass has been reported as wanting to "organize a worldwide boycott of loans to German museums" if his request for the loan is not made. He is quoted as saying, "We will make the lives of these museums miserable ... It will be a scientific war" (Dan Morrison, "Egypt Vows "Scientific War" If Germany Doesn't Loan Nefertiti", National Geographic, April 18, 2007).

And the temperature seems to be rising. Hawass was quoted only last week as saying that antiquities such as the portrait of Nefertiti "were taken out by imperialism ...Well, the days of imperialism are over'' (Abeer Allam, "Queen Nefertiti Boils Cairo Blood as Germans Reject Bust Loan", Bloomberg.com, September 10, 2007).

Berlin is only being asked for a three month loan - not a return (at least at the present time). Clearly "conservation" is being presented as a reason for not allowing the portrait to travel - but is this the real issue?

What other "treasures" and "masterpieces" will be requested?

The discussion is blurring two issues: recent looting and the historic removal of cultural property.

The Bloomberg.com report takes encouragement from the recent return of antiquities from North America to Italy. Yet in those cases the Italian government has been successful in its claims on material that was acquired since the 1970 UNESCO Convention.

Nefertiti left Egypt more than half a century before the UNESCO Convention (and the Rosetta Stone a century before Nefertiti). Should this fine image be on display in Cairo or Berlin? On the banks of the Nile or the Spree? Is it an icon of Egypt for Egypt, or of German achievements in the field of Egyptology?