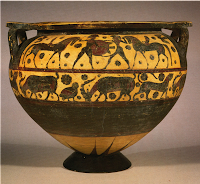 Timothy Rub says the transfer of the art, which includes ancient pieces looted or smuggled out of Italy, will take place Wednesday.
...
As part of the agreement, Italy has promised to lend 13 objects comparable in quality to the returned antiquities and to cooperate on future exhibitions.