Toxic Antiquities: the sales of 1985 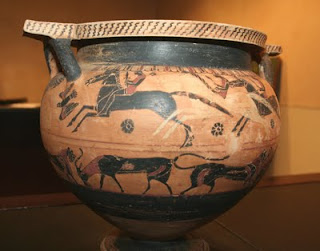 Today's news that two antiquities had been handed over to the Italian authorities is a reminder of the continuing issue of toxic antiquities. The Corinthian krater had apparently been handled by Giacomo Medici and had then surfaced on the market in 1985 through Sotheby's in London ("ICE returns stolen artifacts to Italy", ICE December 2, 2009).

It is significant that an Attic bell-krater that had surfaced at Sotheby's in 1985 had to be withdrawn from a sale at Bonham's in London in October 2008.

Two other pieces that have been returned to Italy had  passed through Sotheby's in 1985. An Attic black-figured neck-amphora was returned from the Royal Athena Galleries, and an Attic black-figured amphora of Panatheniac shape had formed part of the collection of Shelby White and the late Leon Levy.

It is a matter of concern that two auction-houses --- Christie's and Bonham's --- have been willing to offer material from sales that are known to have contained material supplied by Medici and his associates. Why did their due diligence processes fail to identify the potential problem with this particular "provenance"? Auction-houses need to be very wary of antiquities that first appeared at Sotheby's in London during the 1980s and 1990s.