The Case of the St Louis Art Museum Mummy Mask 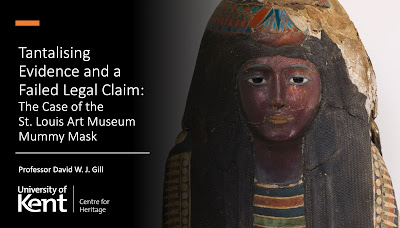 I am looking forward to exploring the parallel histories for the Ka-Nefer-Nefer mummy mask at the Transatlantic Cultural Property Crime Symposium (November 2021).

The Case of the St Louis Art Museum Mummy Mask

Abstract
In 1952 Mohammed Zakaria Goneim, chief inspector of antiquities, excavated an Egyptian mummy and mask at Saqqara. This mummy mask was acquired by the St Louis Art Museum in 1998 from Phoenix Ancient Art for $499,000. The purchase led to a legal claim by the Egyptian authorities. However, the outcome was that the court confirmed the ownership with the St Louis Art Museum. The release of internal documents from the museum reveals a story that suggests that key members of the museum’s curatorial team were aware of sensitivities relating to the history of the mummy mask.
There are two parallel and irreconcilable accounts of the mask between 1952 and 1998. The vendor had acquired a statement from Charly Mathez in 1997 that claimed that the mummy mask had been seen by him in Brussels in 1952 (or 1958). The mask is then reported to have been part of the collection of Suzana Jelinek in Zagreb, before moving into an anonymous Swiss private collection. The mask was then reported to have been displayed for a short time in Geneva’s Musées d’art et d’histoire in 1997 prior to its sale.
The Egyptian authorities claimed that the mask had followed a different path and that it was recorded in the archaeological store in Saqqara in 1959. It then moved to the Cairo Museum from 1959 to 1962 when it returned to the store in Saqqara. It went back to Cairo in 1966, and was finally noted as missing in 1973. It appears to be significant that the personal name in hieratic script that was visible on the right hand of the mask when excavated had been removed by the time that the piece passed through the dealer in Switzerland as demonstrated by publicity photographs taken around 1997.
The museum does not appear to have responded to suggestions (in January 2006) that it should check with the Egyptian authorities to ensure that the mask had not been stolen from the Saqqara store. Zahi Hawass, the then Secretary General of the Egyptian Supreme Council of Antiquities, raised his concerns about the mask in February 2006. This was supported by well-documented instances of thefts from the Saqqara stores, including two alabaster ducks that were returned to Egypt.
The legal case developed in January 2011, and a case for forfeiture was filed in March 2011; this was dismissed on 31 March 2012 by a US District Judge. A parallel case for declamatory relief was finally withdrawn in June 2014. It does not appear to have been disclosed during the hearings that John H. Taylor, an Egyptologist at the British Museum, had raised his concerns about the mask to SLAM curators in February 1999. Such concerns were apparently left uninvestigated by the museum or the legal teams.
The SLAM case raises the issue that legal challenges may not be the most effective way to reclaim cultural property. In contrast the Italian government has managed to secure the return of several hundred objects from North American public museums and private collections through the effective use of the media that has placed moral pressure on museums, auction houses and private individuals. The way ahead may be to develop a more rigorous due diligence process for museum acquisitions that would enhance the legal ownership of objects acquired through the market.