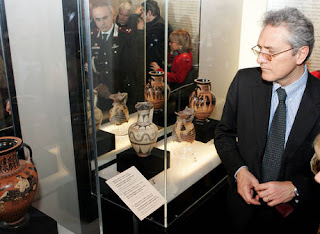 This is an appropriate moment to pay tribute to Francesco Rutelli, the out-going Italian Minister for Culture.

He came into post in May 2006 and his name was quickly associated with the fight to combat the looting of Etruscan cemeteries.
Within a month he was negotiating with the J. Paul Getty Museum:
In September 2006 thirteen antiquities were returned from Boston, and the Getty returned forty pieces to Italy in November 2006 and August 2007. The results of these negotiations went on display in the the first of two exhibitions, "Nostoi", of returned antiquities in Rome, December 2007. These were supplemented in January 2008 by ten items from New York collector Shelby White.

But the highlight was the triumphal return in January 2008 of the Sarpedon krater from the Metropolitan Museum of Art in New York.

But Rutelli was interested in the international market and he ensured that Italy returned looted antiquities to Pakistan (June 2007) and Iran (November 2007).

Rutelli's forceful, yet gracious, discussions with museum directors have highlighted the problems associated with acquiring recently surfaced antiquities. Curators have started to take the due diligence process a little more seriously in the light of his campaign.
- May 02, 2008

Email ThisBlogThis!Share to TwitterShare to FacebookShare to Pinterest
Labels: due diligence, Italy