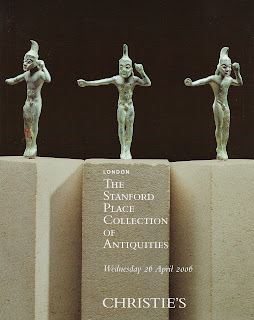 My attention has been drawn to two separate lots from the sale of "The Stanford Place Collection of Antiquities" auctioned at Christie's (London) on Wednesday April 26, 2006. (It is a collection I have discussed before.)

They illustrate some of the intellectual consequences of recently-surfaced antiquities.
Both were acquired from "Ward & Company Works of Art, New York", lot 3 in the "mid 1990s" and lot 18 in 1998.

Both pieces were accompanied by a certificate from The Art Loss Register.

The silver-gilt plaque is almost identical ("similar") to a more fragmentary example acquired by the Princeton University Art Museum in 2002 (and illustrated in the Record of the Princeton University Art Museum 62 [2003] 151-52 [JSTOR]):
And does the "arm-guard" interpretation suggest that it was a part of a set of armour, perhaps from the burial of a warrior? Do the two plaques derive from the same deposit? Or were they just the products of the same workshop?

And the fact that there are three near identical bronze warriors also intrigues me. Were they found together? Or did they come from three separate private collections and converge, fortuitously, in the New York gallery? Do they need to be Laconian?

I am left asking some questions.
All these pieces may, of course, have been in old documented collections (though I am surprised that the sale catalogue had not mentioned the fact).

Oh my dear!Post like this make the whole thing so transparent... Thank you very much for helping us to understand in a so vivd way.

For the Princeton relief:
https://artmuseum.princeton.edu/collections/objects/41291