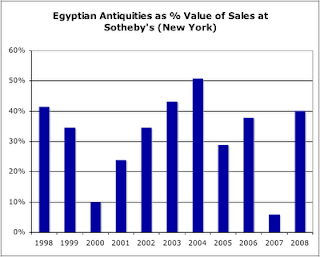 I have also been keeping an eye on past collecting histories. Some 67% of the Egyptian lots in this period (1998-2008) do not appear to have been known prior to 1973 (the date of the declaration by the Archaeological Institute of America). Some 95% of the lots have no recorded find-spots.