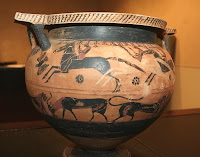 On Monday this week (June 1 2009) staff of the U.S. Immigration and Customs Enforcement (ICE) are reported to have recovered a Corinthian column-krater from Christie's in New York ("Stolen Italian artifact smuggled into the United States found at auction house", press release). The items had apparently been identified through a photographic image.

The investigation into the Corinthian column krater revealed it may have been illegally introduced into the art market by Giacomo Medici and a third party at Sotheby's Auction house in 1985.

Does this mean that the krater appears in the archive of Polaroids seized in raids on the Geneva Freeport?

An item that had passed through one of Sotheby's London sales in 1985 had to be withdrawn from auction at Bonhams last October, and two other pieces that had surfaced by the same route in the same year have also been returned to Italy.

A second Corinthian column-krater has been returned to Italy from the Cleveland Museum of Art.

This announcement coincides with my observations on an Attic cup that had surfaced through a Sotheby's sale in 1984 and that is also due to be auctioned by Christie's.