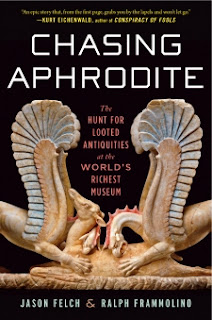 The publication of Chasing Aphrodite will unmask the culture of collecting by North American museums. Authors Jason Felch and Ralph Frammolino have been interviewed for Europa.


Most American museums have yet to fully acknowledge their role in the illicit antiquities trade over past decades. But we have seem a remarkable and relatively sudden change in the policies and practice of American museums, led by a new generation of museum directors who are sensitive to these issues of cultural patrimony. After decades of turning a blind eye, they’re confronting the issue of provenance.

I will comment in more detail about the book in due course but its focus on the J. Paul Getty Museum allows readers to understand the motivation for collecting.