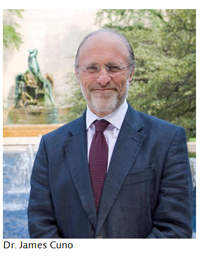 I have been unimpressed by James Cuno's attempts to be a commentator on the looting of archaeological sites. I have reviewed his works elsewhere:

Now Cuno has decided to reopen the discussion with an essay, "Culture Wars: The Case Against Repatriating Museum Artifacts ", Foreign Affairs November / December 2014.

Cuno overlooks some issues that are very relevant to the debate about repatriation. What about the Egyptian material from the Tomb of Tetatki that had been acquired by the Louvre? Is the AAMD 2008 acquisition policy as tight as Cuno suggests?

Cuno limits the information about the returns to Italy as a result of the Medici Conspiracy to what was displayed in the Nostoi exhibition in Rome (and Athens).


it was the Medici scandal that eventually led the Metropolitan Museum of Art, the Museum of Fine Arts in Boston, the J. Paul Getty Museum in Los Angeles, and the Princeton University Art Museum to send those 69 objects back to Rome in 2007.

To that list of institutions (some linked to Gianfranco Becchina rather than Giacomo Medici) we could add (among others) the Cleveland Museum of Art, the Minneapolis Institute of Art, and Toledo Museum of Art. The Dallas Museum of Art took the initiative to return material without being asked. And there are other major collections in North America where acquisitions are linked to Medici (e.g. Virginia Museum of Fine Arts). And my running list from 8 major museums adds up to 326 items returned. (And then we can add in material from a private collector, auction-houses, and dealers.) It does look as if Cuno has down-played the scale of the problem. And while we talk about figures, over 60% of the objects returned from those museums were acquired in the 1990s or 2000s.

Cuno also could have discussed the loan of archaeological material from Italian collections to museums such as New York's Metropolitan Museum of Art and to Dallas. And Princeton was allowed to retain some material although the title was given to Italy.

Perhaps Cuno needs to reflect on the lessons derived from the Medici Conspiracy and respond to the constructive comments by thoughtful museum directors such as Maxwell Anderson.