"Elvis" up for auction 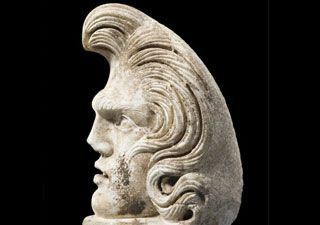 A Roman head apparently known as "Elvis" --- "because of its strong resemblance to the King of rock and roll" --- is due to be auctioned at Bonhams in London this October (Angus Howarth, "All shook up by £1m antiquities auction", The Scotsman July 23, 2008). The head appears to be part of a second century CE sarcophagus.

This piece is part of "a £1 million collection of antiquities which is about to come to auction" and the report is full of superlatives: "one of the world's most stunning private collections of ancient art". There are due to be 150 lots "which once belonged to the Australian collector Graham Geddes". The pieces include "rare Greek and Roman vases and marble reliefs portraying battle scenes".

Bonhams have as yet to provide details of the sale. However, the press release quotes Chantelle Waddingham, Head of Antiquities at Bonhams:

The Graham Geddes Collection represents an enduring passion for the classical past by Australia's foremost collector and dealer. His love for antiquities was sparked in the early 1970's by the inspirational guidance of William Culican and Peter Connor, both lecturers of classical archaeology at the University of Melbourne."

The press release comments a little more about "Elvis":

Fans of the King of Rock 'n Roll, seeing this face from the distant past will be forgiven for thinking that their idol may well have lived a previous life in Rome! Looking at this face with its Elvis-like quiff, strong jaw and nose, one is inevitably led to the thought that the human face for all is diversity and subtlety has after all an ability to repeat itself, hence the shock of the doppelganger, in this case a Roman Elvis.

I am sure Elvis fans will be lining up for this one.

For an image of "Elvis" see the Daily Mail.

I have gathered related stories on a separate post.