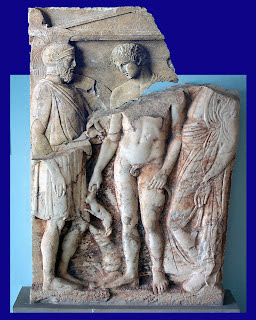 The announcement that Shelby White will be returning two antiquities to Greece later this month has caused me to go back through my notes.

One of the two pieces is a bronze calyx-krater said to be from Pieria in northern Greece. The second is "A fragmentary marble funerary stele with a warrior and young man dating to the 4th century BCE" that is reported (in the press release) to fit a fragment excavated by the Greek Archaeological Service near Porto Raphti in eastern Attica during the 1960s.

One of the exhibits from Glories of the Past - a catalogue well known to readers - is a "Fragment of a grave stele with a warrior and a youth" (no. 97). The two figures are named: Menon and Kleobolos. Elizabeth J. Milleker, the author of the catalogue entry, dates the marble fragment to "About 400-375 B.C." It seems possible that this is the piece mentioned in the press release. (Could this have been mentioned in the statement?) If this connection is correct, the discussion of the stele fragment in Glories is instructive for engaging with a piece that has lost its find-spot. (I offer a possible reconstruction of the near complete funerary stele using the Glories fragment [top].)

Milleker seems reluctant to commit the upper fragment to Attica:

Although, in overall design and subject matter, the stele is similar to Attic grave reliefs of the late fifth and early fourth century B.C., it is difficult to determine where it might have been carved, for it has a number of unusual features.

First, the acroterion "must have been added as a separate piece of marble". This is indicated by the "remains of iron dowels" on the top surface. A parallel for this is cited: a fragmentary relief in the Metropolitan Museum of Art (inv. 30.11.3; SEG 34 (1984) no. 239).

Second, the "warrior differs from the Attic norm not only in the rendering of his drapery but also in certain details of dress". The chiton is said to be "very different from the complex, tubular style current in Athens during the late fifth and early fourth century". The "design" of the chiton that "reaches to the middle of the warrior's upper arm, with a wide opening that extends to the level of his elbow at the end of the stele" is thought by Milleker to be "typical of women's chitons". Indeed, "no ready parallel to the chiton depicted here comes to mind". The helmet "shows a curious deviation from the norm"; the ear appears to have been covered by the helmet.

The presence of finger tips on the left shoulder of the central youth suggests that there was originally a third figure standing to the right. Milleker proposes that the figure should be a woman.

There is also the problem that from the evidence of the upper fragment alone, there was not space for a handshake. "The warrior's lower arm is slightly advanced, and it is unlikely that the hand was empty. He might be imagined holding a phiale or a dagger ..."

As for the youth, Attic iconography suggests that "young men posed like this youth are usually shown alone, reaching down to a pet or a small servant boy, but it cannot be ascertained whether the youth here was accompanied".

Milleker summed up these discrepancies: "The unusual details of the warrior's dress and the plain, flat rendering of his drapery suggest that this stele was not carved in an Attic workshop". She continues, "the stele seems to lack a certain clarity in the organization of its forms that is a hallmark of most Attic work". As a result a conclusion is reached:

The stele must have been carved in an area of the Greek-speaking world, such as the Cyclades or the western coast of Asia Minor, where Attic influence was particularly strong in the late fifth and early fourth century.

She closes with this thought: "Until a telling parallel for this particular relief is found, it is not possible to be more precise about its place of origin".

But if the Shelby White fragment "with a warrior and a youth" is the piece that is to be returned, then it could perhaps fit the lower piece found near Porto Raphti and now in the foyer of the Brauron Archaeological Museum. If so, the Shelby White fragment is likely to be an example of a funerary stele carved in one of the rural workshops of eastern Attica. The "unusual features" are no more than local variations. Indeed the lack of find-spot for the Shelby White fragment allowed erudite, but misplaced, comments to be used in its interpretation. Issues about the (lost) figure to the right, the (lack of) object in the right hand of the warrior, and the pose of the central youth are all explained.

This piece is a good reminder of the intellectual consequences of lost find-spots and the way that the corpus of knowledge is distorted as a result of such a loss. Connoisseurship cannot replace secure information derived from excavations.

Image
Hypothetical composite image based on fragments in the Brauron Museum and in the Shelby White collection.
- July 25, 2008

This is a very compelling post, which certainly highlights the intellectual consequences of collecting or encouraging the collecting of decontextualized material. Fortunately, this stele fragment will soon be rejoined with its counterpart and we now know its full story. Without context, our interpretations of ancient objects, however informed they may be, are just speculation.