Some Thoughts on the Benin Bronzes 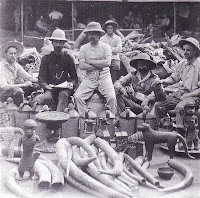 James Cuno (in Who Owns Antiquity? [2008]) takes six objects from the holdings of the Art Institute of Chicago to demonstrate its character as an "encyclopedic museum". The third piece is a bronze plaque from Benin that was acquired in 1933; Cuno speculates that it probably "left" the kingdom of Benin following the punitive raid by the British in 1897.

Kwame Anthony Appiah (Cosmopolitanism [2006]) also uses the Benin bronzes as he asks the question, "Whose Culture Is it, Anyway?"

Some of the heirs to the kingdom of Benin, the people of Southwest Nigeria, want the bronze their ancestors cast, shaped, handled, wondered at. They would like to wonder at—if we will not let them touch—that very thing. The connection people feel to cultural objects that are symbolically theirs, because they were produced from within a world of meaning by their ancestors—the connection to art through identity—is powerful. It should be acknowledged. The cosmopolitan, through, wants to remind us of other connections.

Kwame Opoku has also been commenting on these same bronzes (e.g. "Is James Cuno a “Nationalist Retentionist”?", ModernGhana.com, July 4, 2008; see also a series of postings on Afrikanet.info). His passionate essays have prompted me to hunt through some of the news archives to see what I could find about the dispersal of Benin Bronzes. I cannot pretend this is comprehensive list, but it gives a little bit of the background to this debate.

The "Benin Punitive Expedition" was assembled in January 1897 (see "The Benin Expedition", The Times January 20, 1897). This was in response to the killing of a British party around January 1, 1897 ("Massacre of a British Expedition in West Africa", The Times January 12, 1897). The accounts of the assault on Benin city are chilling. An eye-witness at the inquest into the death of one of the British officers mentioned that the British troops turned their Maxim guns on the defenders who fell from the trees "like nuts" ("The Death of Captain Byrne", The Times March 27, 1897).

This is the context for the removal of these bronzes from Benin City. When Appiah asks us to make "connections", these are the images that spring to mind.

"Loot" soon returned to England. One of the first examples was the display of "Some interesting bronzes from Benin City" that were put on display in the Royal Colonial Institute in London in June 1897. The notice that appeared in the Court Circular of The Times (July 1, 1897) mentioned the bronzes, "the precise origin of which is at present unknown". The bronzes were on loan from the Hon. G.W. Neville, MLC, "of Lagos"; The Times cryptically added that Neville "had accompanied Admiral Sir H. Rawson's recent expedition". (For Sir Harry Holdsworth Rawson see ODNB; "he advanced to Benin city to punish the massacre in January of British political officers ... Benin was captured and looted, then accidentally burnt.")

Franks and his colleagues ... were, as yet, not interested in the material as art - that came with the acquisition of the Benin bronzes at the end of the century ... (p. 161).

... [Dalton's] work on his seminal catalogue of recently acquired material from the Nigerian kingdom of Benin ... (p. 225)

Surely some mention of the circumstances of the acquisition would have been appropriate?

A taste for "Benin Bronzes" quickly developed. On September 12, 1899, a "Sale of Benin Bronzes" took place at "Mr J.C. Stevens's rooms, King-street, Covent-garden' in London (The Times September 13, 1899). This was described as "an unusually choice collection of very fine Benin bronzes" that "included many of the finest specimens yet offered, and mostly came from the palace and ju-ju house of the late King of Benin". The same auction rooms offered "A marvellous collection of BENIN BRONZES consisting of about 500 pieces" as one lot in June 1902 (see notice in The Times, May 17, 1902; report, June 4, 1902). These had been "taken by the British punitive expedition under the command of Admiral Rawson in February, 1897". Among the pieces sold were "ivory tusks carved with figures, animals, &c." (compare Cuno's Who Owns Antiquity? fig. 4 for a "Court of Benin Ivory").

A further selection of Benin bronze surfaced on the London market (in 128 lots) in May 1930 ("Benin Bronzes", The Times April 7, 1930). These came from the collection formed by George William Neville, a member of the "Benin Punitive Expedition". His obituary in The Times November 30 1929 commented,

One of Neville's exploits was to accompany the punitive military expedition to Benin in 1897, from which he returned with a remarkable collection of Benin curiosities.

In the King's compound [at Benin] and the ju-ju houses were discovered numerous works of art in ivory, bronze, brass, &c., buried, in several instances, and covered with the blood of human sacrifice.

These pieces came from the same collection displayed at the Royal Colonial Institute back in the summer of 1897. A further example of the material from Benin City surfacing on the market is provided by the collection formed by Dr R. Allman, medical officer for the Benin Punitive Expedition. This was sold at Sotheby's in December 1953 (The Times December 8, 1953).

Can we ignore the way that these bronzes moved from Benin City to the market and thence to private and public collections? Kwame Opoku has been right to remind us of these shameful issues.
- July 29, 2008

This reminds me of Kwame Opuku's
comment on "New Response to James Cuno."

He drew out a particular quote from Stone's review:

"I assume that many will hope and some I know will pray that this book represents the last death throes of a failed traditional world-view: the dominance of the many by the (very) few; the dominance of a Western scientific tradition over all others; the dominance of a closed view clinging, perhaps subconsciously, to what can only be described as colonial oppression. Perhaps if a dinosaur could have written a book arguing against its extinction, it would have read like this."

Advocates for the protection of cultural property and archaeologists are often labeled "cultural property nationalists," socialists, and other things. But what about those who want to be able to collect or sell whatever they want without any concern as to origin or the circumstances under which it entered the market? Certainly the notion that, for example, "I am an American and my property rights are sacrosanct - I should be able to buy and sell whatever I want - I'm only helping impoverished citizens in Ukraine" is just as imperialistic.

I found a photo in a flea market which appears to show the inside of Neville's house, decorated with Benin bronzes. I've put it on my blog here: http://benicek.livejournal.com/363475.html