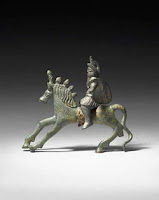 My posting on the Roman horse and rider found just outside Cambridge has prompted a few interesting (private) comments. The piece was sold on May 1, 2008 for £10,200. I added:

The piece can remain in Britain if a purchaser is willing to acquire it "at the recommended price of £22,066.81"

So although market forces in May 2008 suggested that the piece was worth £10,200, its present owner (a client of TimeLine Originals) places a higher value on it. (I am grateful to Brett Hammond for confirming this today.)

Then consider the fourteenth century astrolabe quadrant "Found during an archaeological watching brief in Canterbury by the Canterbury Archaeological Trust in 2005"; elsewhere, "It was found in 2005, associated with other medieval material on the site of an earlier inn just outside Canterbury Westgate on the road to London." It was then sold at Bonhams for £138,000 in March 2007 (see BBC News). A temporary export bar was placed on the astrolabe (see "Time ticks on rescue of rare 14th century pocket astrolabe quadrant", DCMS Press Release). The new price was much higher: "at the recommended price of £350,000 excluding VAT". It was saved for the nation thanks to grants from the National Lottery Heritage Fund (£125,000) (press release), The Art Fund (£50,000), and the British Museum Friends (£175,000). The Art Fund website gives the vendor as Trevor Philip and Sons Ltd.

Let me give another example, the gold coin of Coenwulf, king of Mercia "Discovered by a metal detector user near Biggleswade, Bedfordshire in 2001." The piece was then sold for £230,000 at Spinks (see BBC News). Its export was halted (see "Culture Minister Defers Export Of Rare Gold Coin", DCMS Press Release) and the coin was saved for the nation in 2006 for a sum of £357,832 (see BBC News). This included support from The National Heritage Memorial Fund (£225,000) (Press Release) and The Art Fund (£60,000). The coin was purchased from Davissons Ltd.