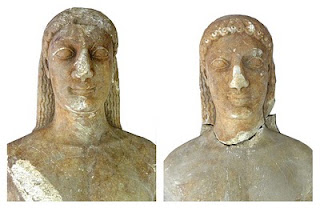 There is some additional information about the seizure of the pair of kouroi near Corinth. Overnight reporting has suggested that the pair of statues were estimated at $12 million ("Greek Men Tried to Sell Stolen Statues for $12M", AP May 18, 2010). Who would have purchased them now that North American museums have decided  to observe 1970 as a benchmark for acquisitions? Is there still a market for classical antiquities in the Middle East and south-east Asia? The news report states:


Police chief Lefteris Economou said the arrests followed information from culture ministry officials. He provided no details on the identity of the potential buyers or which country the finds had been heading for.

There is a suggestion that the kouroi were found at Tenea, not far from Corinth. The kouros now in Munich (Glytothek no. 168 [Richter no. 73]) was said to have been found there in 1846.

Image
Composite from the Hellenic Ministry of Culture