The Schinoussa archive and its potential impact 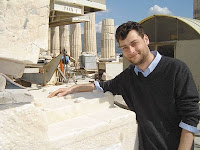 There is a useful report on the background to the identification of the four Roman statues that had been due to be auctioned at Bonhams at the end of April ("Κυνηγός αρχαιοκάπηλων με έδρα το Κέιμπριτζ", Eleutherotypia May 8, 2010). The article explains the role of Cambridge researcher Christos Tsirogiannis.

It also records the decision to remove Ioannis Diotis from working on the archive of material seized on Schinoussa. This archive contains evidence that has already helped to bring some material home to Greece.