The Medici Dossier and the Identification of "Stolen Artifacts" 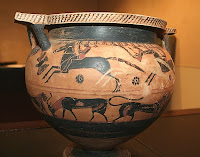 Six months ago Sung-Hee Park, the Public Relations Officer for Christie's, drew attention to the way that the "transparency of the public auction system" at Christie's had allowed "two stolen artifacts" to be identified.

Washington lobbyist Peter Tompa has now questioned the use of images to identify objects in public sales. He will be unaware that Christie's were asked by a third party on May 11, 2010 about three specific lots in their June 2010 sale. Full Polaroid images similar to those lots were released on May 12, 18, 19 after Christie's had replied to the third party.

Christie's have made it clear that they "do not sell works that we have reason to believe are stolen". Such a position is to be applauded.

Tompa, if he cares about cultural heritage, should welcome the identification of such material that highlights the issue of recently-surfaced antiquities that appear to have come from Italy. But perhaps he has detected another indication of "Operation Tartuffo" at work.

Image
Corinthian krater seized from the premises of a New York auction-house during 2009.