Princeton: further information on the returns 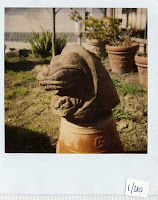 Princeton, unlike Boston and the J. Paul Getty Museum, has never released the collecting histories of the pieces returned to Italy (for list see here). Earlier this summer Fabio Isman responded to the story in the New York Times about Edoardo Almagià and Princeton University Art Museum (Fabio Isman, "Scoppia il caso Almagià-Padgett", Il Giornale dell'Arte June 2010). Isman reproduced images of two of the pieces - one returned to Italy, the other remaining in Princeton - that feature in the Medici Dossier seized in the Geneva Freeport. So it appears that the Italian authorities have not pressed for the return of every piece identified from the selections of photographic material.

But how is Princeton going to respond to the Almagià report? What will the file say about the art museum's acquisition policy?