The bronze Zeus returned to Italy 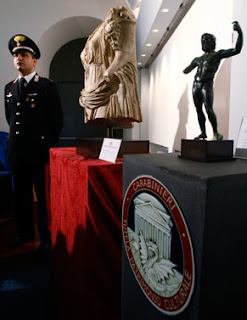 Earlier today I noted the return of a marble female torso and a bronze Zeus to Italy. The statue of the Zeus is distinctive with the right arm lost below the elbow. (There is now a short statement on the Carabinieri website; see also "Zeus statue returned to Italian museum after 30 years", Daily Telegraph November 19, 2010)

Paul Barford also noted the story and added a quote from AFP.


The bronze statue, which was stolen from the National Roman Museum in 1980, was sold by Sotheby's auction house in New York in 2006 and later put on display at an exhibition in Cleveland in the US state of Ohio.

I have been unable to find a bronze Zeus at auction at Sotheby's in 2006. However a bronze figure of a Zeus, some 24 cm tall, with a "missing right hand" (it appears to be missing from the elbow) was auctioned at Sotheby's New York on 9 December 2004, lot 249.

The Zeus auctioned at Sotheby's in 2004 had been exhibited at the Cleveland Museum of Art:

At the time of the Cleveland exhibition this Zeus was the property of Mr and Mrs Lawrence A. Fleischman. The Fleischman statue had appeared in the Search for Alexander exhibition at The Fine Arts Museums of San Francisco in 1982. It was published by Joyce Geary Volk ("A Lysippan Zeus", California Studies in Classical Antiquity 3, 2 [1984] 272-83) who reported that in 1984 the Zeus was the property of Edward H. Merrin: "Mr Merrin purchased it from a dealer who had obtained it from a Swiss collector in the late 1960s".