The collecting history of the Merrin Zeus 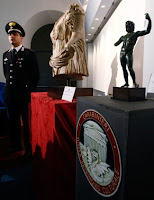 It appears that my suggestion that the bronze Zeus returned to Italy was significant. This means that we can reconstruct the recent collecting history:

a. 1980. Statue reported to have been removed from the Museo Nazionale Romano.
b. 1982. Statue surfaced in the supplementary exhibition, The Search for Alexander, in The Fine Arts Museum of San Francisco (no. S-10).
c. 1983. Statue appeared in the supplementary exhibition, The Search for Alexander, in the Royal Ontario Museum, Toronto (no. S-14).
d. 1984. Statue published by Joyce Geary Volk in California Studies in Classical Antiquity. Owner stated to be Edward H. Merrin of New York City. Collecting history stated: "Mr. Merrin purchased it from a dealer who had obtained it from a Swiss collector in the late 1960s".
e. 1988-89. Statue appeared in The Gods Delight: The Human Figure in Classical Bronze, organized by Arielle P. Kozloff and David Gordon Mitten (no. 29).  Owner stated to be: Mr. and Mrs. Lawrence A. Fleischman.  Exhibited: The Cleveland Museum of Art; The Los Angeles County Museum of Art; the Museum of Fine Arts, Boston.
f. 2004. Statue auctioned at Sotheby's New York December 9, lot 249. Sold for $164,800. Sold as: Fleischman collection, New York.
g. 2010. Statue returned to Italy.

If the identification is correct, and I have no reason at present to doubt it, then there are serious questions to ask.

Where did Edward H. Merrin obtain the bronze Zeus? What is the name of the "dealer who had obtained it from a Swiss collector in the late 1960s"? And what is the identity of the anonymous Swiss dealer?

Is not the onus also on institutions organizing exhibitions through loans from private collectors to take steps to avoid the public exhibition of stolen goods and thus their legitimisation? This is one of Renfrew's main arguments about museums working with collectors.

Where was the due diligence of The Fine Arts Museum of San Francisco, the Royal Ontario Museum, Toronto, The Los Angeles County Museum of Art, the Museum of Fine Arts, Boston?

Were the governments of all potential source countries consulted and invited to comment on each of the specific items collected together for these several exhibitions by those museums? If not, then how can the victim of a crime be held responsible for the dealings of foreign institutions?