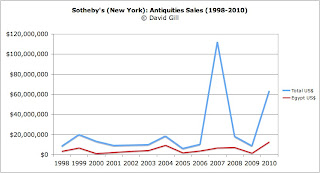 Staggering figures. I guess that's why they keep digging!

This is of course the money made by foreign sellers, very little of this I assume will be going to Egypt, from where it was taken.

I am curious, what kind(s) of material is responsible for the substantial peak in 2007?