The Medici Dossier and the Minneapolis krater 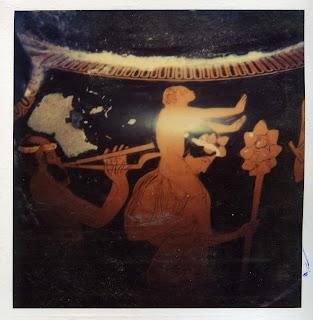 Lee Rosenbaum has asked the Minneapolis Institute of Arts (MIA) a series of key questions about the Attic red-figured krater acquired in 1983 reportedly on the recommendation of Michael Conforti ("Transparency Gap: Minneapolis Institute Refuses to Discuss Greek Hot Pot", Culturegrrl December 20, 2010). Her starting point is a letter to the New York Times by Kaywin Feldman, director of the MIA and president of the Association of Art Museum Directors (AAMD), where she noted "the highest principles of collecting and stewardship of their collections".
Rosenbaum rightly shows that this is not a new story. She links to a statement made by MIA in November 2005 (i.e. over five years ago). She also notes that the MIA confirms that the statement as reproduced is accurate. In other words staff at MIA had been shown an image of the krater by a reporter from the Los Angeles Times.

The image, as Rosenbaum reminds us, is derived from the Medici Dossier. It shows the krater still cover with salt, apparently fresh out of the ground.

Readers will be aware that snow is having a major impact in the UK and even Looting Matters is not immune as access to research notes is at present restricted. However an e-trail suggests that I tried to contact MIA in 2007. However I did email Michael Padgett, now at Princeton, who had published a study of the krater ("An Attic Red-Figure Volute Krater", The Minneapolis Institute of Arts Bulletin 66, 1983-86 [1991]). He had noted that "Robert Guy saw the krater on the London market" prior to its purchase. Elsewhere, in an abstract that appeared in the American Journal of Archaeology, he related that the krater had passed through private collections in Switzerland and the United Kingdom. (I have discussed some of the issues in Present Pasts for 2009.)

We also know that the Italian prosecutor has stated in a 2009 interview that he would like to see the krater returned to Italy.

Even after five years of "provenance research" (i.e. working out the collecting history) a representative of the museum stated that "MIA is taking steps to research the krater and for now that's all we can say about it". Does this mean that MIA is only now starting to research the collecting history? And under AAMD guidelines the staff at MIA do not need to be contacted by Italian authorities, but rather they should be proactive and contact the Italians.

Has the time come for the curatorial staff at MIA to resolve the issue?

Image
Detail of a krater from the Medici Dossier