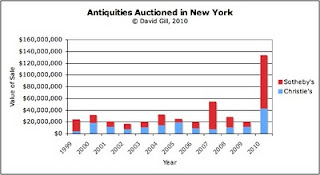 A year ago it looked as if the New York antiquities market was in decline. The results from Sotheby's and Christie's this week show that there has been a massive upturn, bolstered by the Antinous at Sotheby's and the Cycladic marble figure at Christie's. Together they accounted for over $40 million (out of $79 million achieved this week).

Over $133 million worth of antiquities have been sold at the two auction houses this year. (The second highest year, 2007, only reached $55 million.)