Nefertiti and the Parthenon Marbles 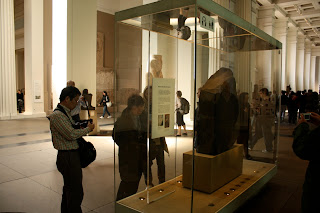 I am grateful to my sharp-eared colleague Chris Hall for drawing my attention to this interview.

Salima Ikram, American University in Cairo, and Tom Holland, were in conversation with John Humphrys of BBC Radio 4's "Today" programme earlier today [Monday, February 21, 2011: interview]. They discussed the limited looting in the Cairo Museum and were in agreement that the people of Egypt demonstrated that they cared about the protection of their antiquities.

Humphrys explored the issue of distributing significant finds across a number of museums around the world. They considered the issue of material from Afghanistan and drew attention to the forthcoming exhibition at the British Museum.

Salima Ikram was asked what she would like to see returned to Egypt and top of her list was the head of Nefertiti in Berlin. She was also concerned to see fragmentary pieces reunited. She also made it clear that she was not speaking in an official capacity.

Tom Holland seemed to hesitate over the question, and when pressed by Humphrys closed with the words, "I wouldn't say the Elgin marbles".