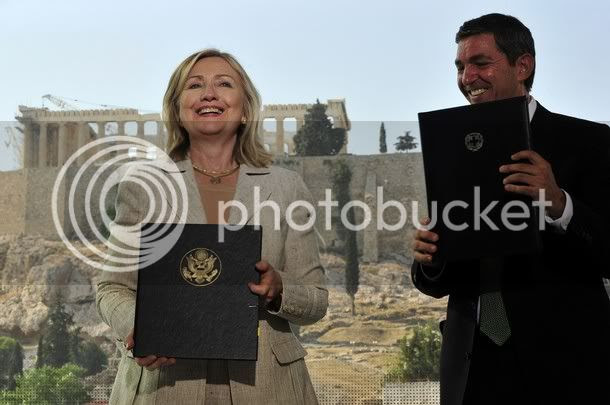 Source: rrowlands
Hillary Clinton has signed the MOU with Greece in the Acropolis Museum in Athens (July 17, 2011, press release).


Secretary of State Hillary Rodham Clinton and Minister of Foreign Affairs Stavros Lambrinidis signed a Memorandum of Understanding Between the Government of the United States of America and the Government of the Hellenic Republic Concerning the Imposition of Import Restrictions on Categories of Archaeological and Byzantine Ecclesiastical Ethnological Material through the 15th Century A.D. of the Hellenic Republic.

Signed at the Acropolis Museum with the Parthenon temple as a backdrop, the agreement will strengthen collaboration to reduce looting and trafficking of antiquities, and provide for their return to Greece. It also aims to further the international interchange of such materials for cultural, educational, and scientific purposes. The two countries, both parties to the UNESCO Convention on the Means of Prohibiting and Preventing the Illicit Import, Export and Transfer of Ownership of Cultural Property, entered into the agreement following a request submitted to the Department of State by the Government of the Hellenic Republic for assistance under the Convention. Assistant Secretary Ann Stock, acting as the president’s designee, made the necessary determinations to enter into this agreement. The agreement is consistent with the recommendation of the State Department’s Cultural Property Advisory Committee.

Readers of Looting Matters will be aware that opinions on the MOU were sought last September.

Hillary Clinton has expressed her personal interest in the issue of looted antiquities commenting on the "Weary Herakles", a partial statue that Boston's MFA has just announced it will be returning to Turkey.

David, This is just great news! Thanks so much for sharing!