Consignments to Sotheby's New York in the 1990s 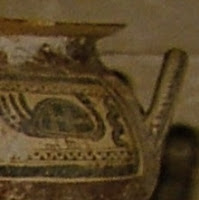 There was some discussion of an Apulian rhyton when it was offered on the New York market last year. It had first surfaced at Sotheby's New York in 1994. The rhyton seemed to match an image in one of the seized Swiss dossiers of images. It raised the possibility that the pattern known for the London market in the 1980s and 1990s (and so well documented by Peter Watson in Sotheby's: Inside Story) was also repeated in New York.

Christie's pressed ahead with the sale of the rhyton in spite of calls for the lot (and others) to be withdrawn.

It now appears that another Italian piece, a Peucetian clay stamnos, also seems to feature in one of the Swiss photographic dossiers (December 7, 2011, lot 154). In the photograph the stamnos is covered in deposits that could suggest that it was fresh out of the ground in southern Italy when the photograph was taken. The stamnos first surfaced at Sotheby's New York in 1995. Who consigned it? What else came from the same source?

Was it the same person in whose dossier the image was recovered?

I am grateful to Cambridge University researcher Christos Tsirogiannis for his identification of the stamnos.

It has been reported (by ARCA ) that a portrait of the emperor Septimius Severus that had been stolen from the Antiquarium of Santa Maria ...