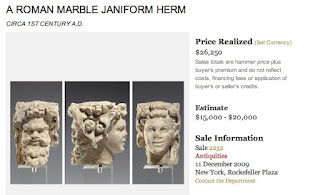 The third object to be returned to Italy this week was a Roman marble janiform head. This sold at Christie's Rockefeller Plaza on December 11, 2009 for $26,250 (lot 141).

The collecting history was given as follows:
The ICE press release states:


The second investigation tied to Becchina involved a Roman marble statue, a janiform herm that was believed to have been smuggled out of Italy into the United States via Switzerland. HSI special agents in New York initiated an investigation into the sculpture which had been auctioned and sold at Christie's for $26,250. It was later seized at Christie's pursuant to a seizure warrant obtained by the U.S. Attorney's Office for the Southern District of New York and in May 2011, forfeited to HSI for return to Italy.

This raises the suspicion that the head was not in a Canadian private collection in the 1960s. Was this part of the collecting history fabricated? Did Christie's check the documentary evidence? What was the scope of Christie's due diligence search? Does this mean that potential buyers need to treat collecting histories provided by Christie's with caution? What action will Christie's take to ensure that the auction-house does not handle recently surfaced antiquities?